This website requires the use of Javascript to function correctly. Performance and usage will suffer if it remains disabled.
How to Enable Javascript
Pakistan Flooding Kills Over 1,500 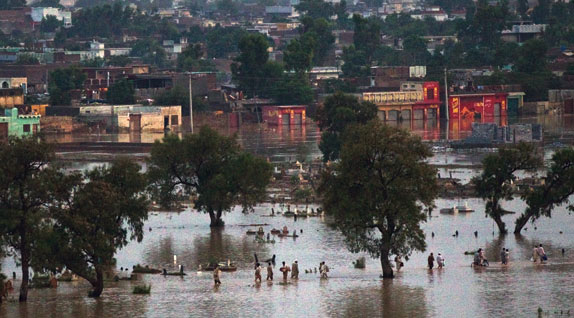 Torrential rains in northwestern Pakistan resulted in massive flooding and landslides, which killed more than 1,500 people and left as many as 1.3 million homeless. The water wiped out livestock, crops and even complete villages. Days after the initial downpours, close to 27,000 people still remained trapped, awaiting rescue.

Behrouz Mehri/AFP/Getty Images
Pakistani men and boys gather to receive food at a camp for the displaced set up inside a college on the outskirts of the town (Aug. 2, 2010).

Daniel Berehulak/Getty Images
A woman looks onward as she surveys the damage to her home (Aug. 1, 2010).

Daniel Berehulak/Getty Images
Aftermath of the flood: A woman washes a mat as she sifts through salvageable items from her home in Pabi, near Nowshera, Pakistan (Aug. 3, 2010).

“Relief work for some 3.2 million people has been delayed by swamped roads, washed-out bridges, and downed communication lines, and survivors have complained about government inaction,” CBS News reported.

More than three million people have been affected by the storm, which dumped 12 inches of rain in 36 hours on Pakistani towns, triggering what Army Major General Ashfaq Nadeem described as “the flood of the centuries.”

According to BBC News, “The United Nations’ World Food Programme says it has provided emergency food for 42,000 people in Pakistan…and that by the end of the week it expects to have helped 250,000 people.

On Sunday, the United States promised to assist with $10 million in emergency aid.

“Officials say the disaster is escalating as more rain is expected in the next two days and river levels are rising in the south of the country,” ABC News reported.

Many survivors are unsatisfied with the government’s response. A group of approximately 300 Pakistanis blocked a high-traffic road in the town of Nowshera in protest.

“This is our fifth day,” a local man told PBS News. “Nobody has come from the government. We’re staying on the mountain. We lost everything. It’s each man for himself, and we have no help.”

In addition to the devastation, health authorities are concerned about the spread of waterborne diseases such as cholera and potential for poisonous snakes to attack flood victims.

“We saw destruction during the three years of the Taliban and then during their fight with the army,” a flood victim told The Associated Press. “But the destruction we have seen in the last three days is much more.”