This website requires the use of Javascript to function correctly. Performance and usage will suffer if it remains disabled.
How to Enable Javascript
Earthquake in China Kills Over 1,900

Earthquake in China Kills Over 1,900 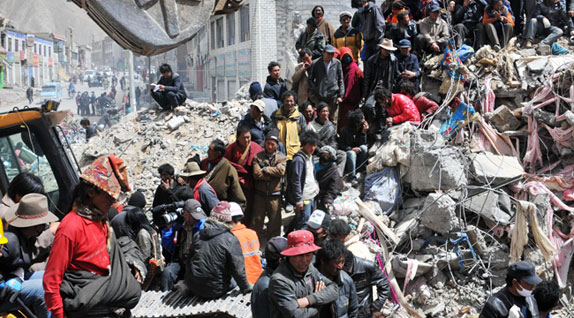 On the morning of April 14, a 6.9-magnitude earthquake struck the Western Chinese province of Qinghai near Tibet, killing an estimated 1,944 and injuring more than 12,000.

In the mountainous southwestern province of Qinghai, the primarily Tibetan town of Jiegu and surrounding areas were severely hit. Buildings collapsed or were damaged, leaving many trapped. Mud and wood homes, schools, temples and large buildings crumbled. The top of a Buddhist pagoda was shaken off its supports.

Authorities estimate that 85 percent of the homes in Jiegu were destroyed.

Downed power lines, strong winds, freezing temperatures, landslides and collapsed bridges leading to the nearest airport hindered rescuers, who have been forced to dig through the rubble by hand until aid arrives.

In addition, The Associated Press reported that a lack of resources has slowed rescue efforts.

“A local military official, Shi Huajie, told CCTV rescuers were working with limited equipment. ‘The difficulty we face is that we don’t have any excavators. Many of the people have been buried and our soldiers are trying to pull them out with human labor,’ Shi said. ‘It is very difficult to save people with our bare hands.’”

Tibetans are working side by side with soldiers and armed police in an attempt to save lives until more equipment, temporary shelters and medical personnel arrive.

“I see injured people everywhere,” a local spokesperson said to Xinhua News Agency, as reported by Reuters. “The biggest problem now is that we lack tents, we lack medical equipment, medicine and medical workers.”

According to The Washington Post, China’s Earthquake Network Center reported that the temblor was triggered by a minor quake at 5:39 a.m., which was followed by six sequential quakes and numerous aftershocks.

The Asian nation has been an area of seismic activity. On May 12, 2008 in the Sichuan province in southwestern China, an 8.0-magnitude earthquake killed more than 87,000 people. In August 2009, a 6.2-magnitude quake in the same province triggered landslides and collapsed homes.

The death toll from the earthquake is expected to rise as rescue efforts progress.