This website requires the use of Javascript to function correctly. Performance and usage will suffer if it remains disabled.
How to Enable Javascript
Rioting Rocks Venezuela 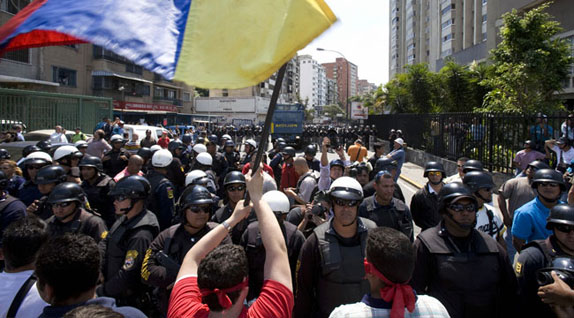 Miguel Gutierrez/AFP/Getty Images
Clash in Caracas: Policemen surround students as they protest against the suspension of the signal of private RCTV broadcast network in Caracas (Jan. 26, 2010).

Angry protesters by the thousands spilled into the streets of Venezuelan cities last weekend. The ensuing violence resulted in the death of a teenager and wounding of nine police officers.

The protest was in response to government closure of the popular television station RCTV Internacional. This was the second time in just over two years that the station, which has been critical of 11-year President Hugo Chávez, has been shut down.

International freedom groups, as well as the United States government, sharply criticized the closure as an attack on freedom of expression.

“Any time the government shuts down an independent network, that is an area of concern,” U.S. State Department spokesman Philip Crowley told Reuters.

Supporters loyal to Mr. Chávez claim Venuzuela’s problems are not the president’s fault.

“Things aren’t all as we would like them to be, but we know that El Comandante (Chavez) is doing what he can to help us, the poor,” one 39-year-old bricklayer told Fox News.

Mr. Chávez maintains that escalating crime in his country is the fault of Colombia’s right wing paramilitary, which is attempting to destabilize Venezuela’s security.

Political science professor, Margarita Lopez Maya, says that while many do not feel the president can solve the problems, there does not seem to be anyone else who can, as no effective opposition exists in Venezuela.