This website requires the use of Javascript to function correctly. Performance and usage will suffer if it remains disabled.
How to Enable Javascript
Clashes Intensify in Iran’s Capital

Violence rocked the streets of Tehran, Iran, as the government attempted to quell lingering protests stemming from the hotly contested June 12 re-election of President Mahmoud Ahmadinejad. 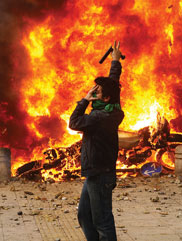 Amir Sadeghi/AFP/Getty Images
Tumult in Tehran: An Iranian opposition supporter gestures next to a burning police motorcycle set on fire during clashes with security forces in Tehran (Dec. 27, 2009). At least five protesters were killed in clashes with security forces in central Tehran after the opposition used a Shiite mourning event to stage anti-government protests.

Opposition leader Mir Hossein Mousavi, who lost to Mr. Ahmadinejad in the summer election, said the nation was in “serious crisis” (The New York Times).

The Los Angeles Times described the scene: “Across the capital, witnesses described scenes of pandemonium. One described Tehran as a war zone.”

“Black plumes of smoke could be seen rising from downtown Tehran. Video posted online showed protesters beating up pro-government militiamen as their motorcycles burned in the background” (ibid.).

Iranian Parliament Speaker Ali Larijani called the demonstrators “blasphemers and counter-revolutionaries” who deserve harsh punishment for opposing the government (UPI). Thousands of Iranians took to the streets of Tehran to show their support of the current administration.

One video shows protesters flooding a street, some walking in locked arms and chanting. After a pop of gunfire, the crowd scatters in fear.

“The position of me and the United Nations is that the genuine will of the Iranian people should be fully respected,” UN Secretary-General Ban Ki-moon told reporters.

Since Mr. Ahmadinejad’s June election, ongoing protests have divided the nation, with Mr. Mousavi’s supporters claiming the vote was fraudulent.

Continued unrest has led to a reported 70 deaths since June and more than 2,000 arrests.