This website requires the use of Javascript to function correctly. Performance and usage will suffer if it remains disabled.
How to Enable Javascript
Raw Sewage Seeping into City Water Sources 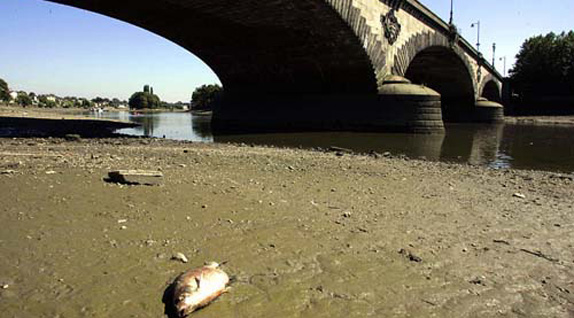 Alessandro Abbonizio/AFP/Getty Images
Deadly waters: Thousands of fish died when about 661,000 tons of raw sewage were discharged into the Thames River in London after thunderstorms left the city’s Victorian sewer system overwhelmed in 2004.

“In the last three years alone, more than 9,400 of the nation’s 25,000 sewage systems—including those in major cities—have reported violating the law by dumping untreated or partly treated human waste, chemicals and other hazardous materials into rivers and lakes and elsewhere…” the newspaper reported.

“As cities have grown rapidly across the nation, many have neglected infrastructure projects and paved over green spaces that once absorbed rainwater. That has contributed to sewage backups into more than 400,000 basements and spills into thousands of streets, according to data collected by state and federal officials. Sometimes, waste has overflowed just upstream from drinking water intake points or near public beaches” (ibid.).

The Centers for Disease Control and Prevention estimates that 250 food-borne illnesses across the United States breed 76 million cases of food-borne diseases each year—some of which are directly caused by contaminated water. This amounts to 325,000 hospitalizations and 5,000 deaths because of tainted water.

“‘The public has no clue how important these sewage plants are,’ said [Bob] Connaughton of the Brooklyn [Owls Head Water Pollution Control Plant]. ‘Waterborne disease was the scourge of mankind for centuries. These plants stopped that. We’re doing everything we can to clean as much sewage as possible, but sometimes, that isn’t enough’” (The New York Times).

Government officials say that during the next 10 years as much as $400 billion will be needed to renovate the U.S. sewer system.

New York City is not the only metropolis with this problem.

Aging infrastructure combined with heavy autumn rains in Britain this year have caused more than 9.3 million tons of raw sewage to be dumped into the Thames River (London Evening Standard).