This website requires the use of Javascript to function correctly. Performance and usage will suffer if it remains disabled.
How to Enable Javascript
Pope Calls for a “True World Political Authority”

Calling for the reformation of the United Nations “and likewise of economic institutions and international finance” in the wake of the global financial crisis, Pope Benedict XVI, in his third encyclical, wrote that there is an “urgent need of a true world political authority.”

In his encyclical—the second-highest level of papal teaching in the Catholic Church—the pontiff added, “Furthermore, such an authority would need to be universally recognized and to be vested with the effective power to ensure security for all, regard for justice, and respect for rights.”

“The document ‘Charity in Truth,’ was in the works for two years, and its publication was repeatedly delayed to incorporate the fallout from the crisis. It was released a day before leaders of the Group of Eight industrialized nations meet to coordinate efforts to deal with the global meltdown, signaling a clear Vatican bid to prod leaders for a financially responsible future and what it considers a more socially just society” (Associated Press). 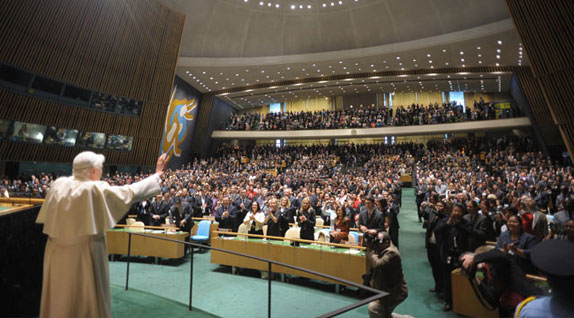 “A True World Political Authority”...With “Real Teeth” – History and Prophecy Align
What does it mean when the top religious leader of 1.2 billion believers calls for the formation of a global political entity “with real teeth”?