This website requires the use of Javascript to function correctly. Performance and usage will suffer if it remains disabled.
How to Enable Javascript
Honduran Military Coup Sparks Violence in the Streets 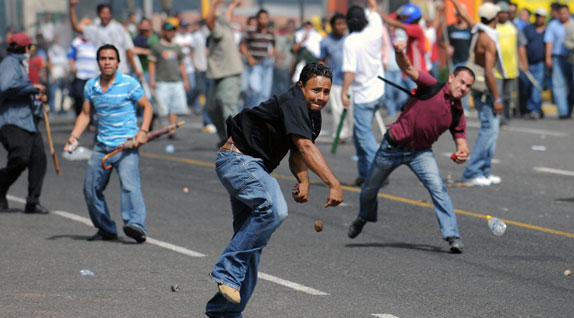 In a dawn raid, soldiers arrested Honduran President Manuel Zelaya at his home and exiled him, via military plane, to neighboring Costa Rica. National lawmakers appointed Roberto Micheletti, head of Congress, to serve as acting president.

In response, approximately 2,000 pro-government protesters, some with shovels and metal poles, burned tires in front of the presidential palace and in the streets of Tegucigalpa, the nation’s capital, demanding the return of their president. Fear of a coup days earlier had already shut down most downtown companies.

Mr. Zelaya—a former businessman who was elected in 2006 as a conservative, but turned to leftist policies during his first term in office—urged citizens to peacefully resist. “I am the victim of a kidnapping by Honduran soldiers,” he told Venezuelan state television. “I was deceived by the military elite” (AFP).

The overthrow was the first successful military coup in Central America since the Cold War.

Although constitutional law mandates that his non-renewable term end in January 2010, 56-year-old Zelaya angered the army, courts and Congress by pushing for an unofficial public vote to rewrite the constitution and extend the four-year limit so he can legally seek the presidency when his term expires.

But military leaders refused to distribute ballot boxes for the vote, prompting Mr. Zelaya to fire military chief Gen. Romeo Vásquez and Defense Minister Edmundo Orellana Mercado. As the president set up voting stations, the Supreme Court unanimously ruled the referendum illegal, ordering Mr. Zelaya to reinstate the fired military chief. When the Honduran leader did not comply, the court instructed the army to remove the now-exiled president.

The overthrow brought immediate responses from the international community.

Venezuelan President Hugo Chávez, Mr. Zelaya’s ally, called it a coup d’état, asserting that the United States must have played a role. Speaking on state television, Mr. Chávez accused Honduran troops of detaining and beating Venezuelan and Cuban ambassadors. If his nation’s ambassador dies, he warned, or troops enter the Venezuelan embassy, his military will respond. Stating that Venezuela’s armed forces are on alert, he said he will do everything necessary to put down the coup (Reuters).

President Chávez also promised to remove any successor sworn in as Honduras’ next president.

U.S. President Barack Obama called the coup “not legal” and expressed that he was “deeply concerned” over Mr. Zelaya’s removal, saying in a White House-issued statement, “I call on all political and social actors in Honduras to respect democratic norms, the rule of law and the tenets of the Inter-American Democratic Charter. Any existing tensions and disputes must be resolved peacefully through dialogue free from any outside interference.”

Ecuador, Brazil, Cuba, Bolivia, Nicaragua and the European Union have also refused to recognize the new government, and called for Manuel Zelaya’s return to office.