This website requires the use of Javascript to function correctly. Performance and usage will suffer if it remains disabled.
How to Enable Javascript
Iran: Worst Civil Unrest Since 1979 Islamic Revolution 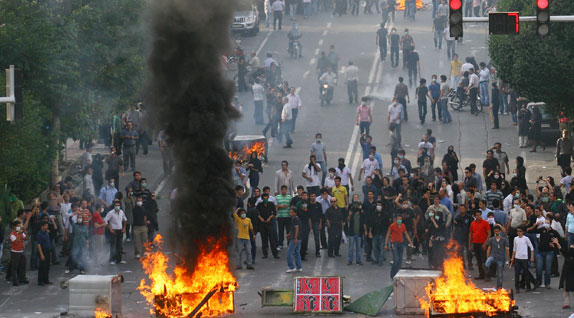 The government reported at least 17 deaths as a result of the post-election violence. But outside media outlets, which the Iranian government banned from covering protests, stated that fatalities may exceed 150. According to the London Times, more than 2,000 people were arrested and hundreds are missing.

In a statement to lawmakers on state-run Press TV, Mr. Khamenei said that the Islamic nation and its people “will never give in to coercive demands with regards to Iran’s presidential elections” (CNN).

After this announcement, the government unleashed riot police and the volunteer Basij militia. Riding on motorcycles, the Basij used pipes, axes, daggers, pepper spray and guns to disperse large crowds. Casualties included Neda Agha Soltan, who died immediately after she was fatally shot below the neck. Her death became a rallying cry among protesters.

Police scattered the demonstrators, who fled home for fear of their lives, but defiantly continued to shout from their rooftops at night: “Allahu Akbar (God is Greatest).”

In response to the taunts, the Basij stormed houses, destroying belongings and terrorizing residents.

On the website of his newspaper, Kalamah, opposition candidate Mr. Mousavi complained that the government also wants to silence him.

But the West denies meddling in Iran’s affairs. In a public statement, U.S. President Barack Obama said the accusations “are patently false” and “an obvious attempt to distract people from what is truly taking place within Iran’s borders.”