This website requires the use of Javascript to function correctly. Performance and usage will suffer if it remains disabled.
How to Enable Javascript
Iran Streets Torched Following Presidential Election 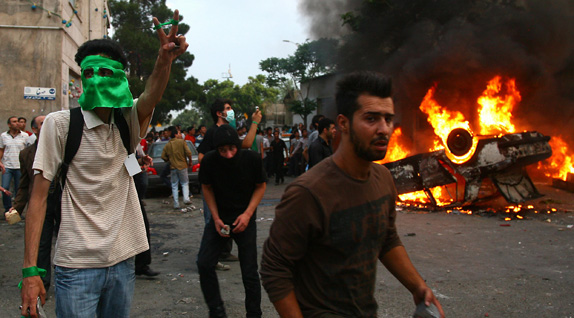 AFP/Getty Images
Smoke billows from a car set on fire by supporters of defeated Iranian presidential candidate Mir Hussein Moussavi to protest the killing of a demonstrator in Tehran (June 15, 2009).

Thousands of Iranian voters poured into the streets of Tehran after officials announced Mahmoud Ahmadinejad’s presidential re-election on June 12. Protests turned violent when skeptics alleged election fraud against Mr. Ahmadinejad. Since the election, at least eight people have died in riot-related violence and the Iranian government has arrested hundreds of reformists and 10 Iranian journalists.

A security officer estimated the horde in Tehran numbered from 1.5 to 2 million (Times, London).

In response, rioters barricaded streets, torched buses, motorcycles, tires and garbage skips, which blackened the Tehran skyline with dense spirals of smoke. In the aftermath, debris littered the pavement and roads, and bank windows were left shattered.

The government of France and Germany voiced disapproval of Iran’s response to the protests. President Obama was “deeply troubled” by the inhumanities committed against Iranian citizens.

Mr. Moussavi’s popularity surged before the election and his final vote percentage appeared fraudulent. Critics pointed out that counting nearly 40 million votes in only a few hours was impossible and alleged that some ballot boxes were not yet opened before the winner was declared. Also, Tehran did not allow foreign election monitors, meaning polls were not independently supervised to ensure a fair vote.

Iran’s supreme cleric, Ayatollah Ali Khamenei, who holds the most political power in the nation, confirmed the election results the morning after the vote, calling it a “divine assessment,” which appeared to close the door on challenges from Iran’s reformist camp. But after two days of rioting, Mr. Khamenei ordered an investigation into the allegations of fraud (Associated Press).