This website requires the use of Javascript to function correctly. Performance and usage will suffer if it remains disabled.
How to Enable Javascript
London: Sri Lankan Protestors Clash With UK Police 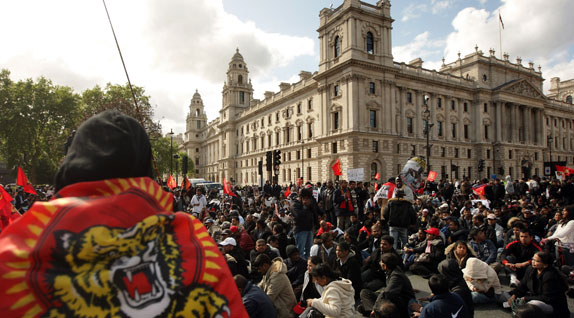 Oli Scarff/Getty Images
Outcry: Protesters in London, England, stage a sit-in demonstration on the road in front of the Houses of Parliament to show their opposition to the Sri Lankan government’s offensive against the Tamil Tigers (May 18, 2009).

Hours after Sri Lanka’s government declared the defeat of the Liberation Tigers of Tamil Eelam (LTTE) and the killings of top rebel leaders, Tamil protesters in London, England, clashed with police.

The Tamils had been protesting in London for over a month to stop the civil war in Sri Lanka. When the war officially ended, up to 5,000 Tamils held a sit-in protest in front of the Parliament asking for London to mediate the release of fellow countrymen still held in internment camps in northern Sri Lanka.

Violence erupted when law enforcement authorities tried to break up the demonstration and apprehend protesters for public offense. Of the 25 police officers and five protesters injured, three officers and three demonstrators were treated at the hospital.

Over the past several months, following Sri Lankan President Mahinda Rajapaksa’s comments that he saw the imminent defeat of LTTE in their fight for a separate homeland, thousands of Tamil expatriates had been protesting in Toronto, Paris, Berlin, Washington, D.C., and at the United Nations headquarters in Geneva, calling for a ceasefire.

More than 800,000 Tamils outside Sri Lanka had been supporting LTTE rebels by pouring US$200-300 million yearly into a war fund, with most of the money coming from those living in Australia and other Western nations, making it one of the most well-funded rebel groups in the world (Jane’s Intelligence Review).

Tamil insurgents had been waging war for over 25 years for a separate state in Sri Lanka. The rebel group was founded and led by Velupillai Prabhakaran, who died when the Sri Lankan military advanced into rebel territory. A master strategist, Mr. Prabhakaran was credited with changing the ragtag LTTE into one of the most feared and brutal insurgent forces. Each rebel, including Mr. Prabhakaran himself, carried a cyanide vial for suicide in case of capture.

Listed as a terrorist organization by 32 countries, LTTE was considered one of the world’s most ruthless insurgency groups. The Tigers pioneered the suicide belt and used women for suicide bombings.

• Mr. Prabhakaran refused to lay down arms in return for autonomy in a peace plan brokered by Norway.

The Hindu Tamils comprise nearly 20 percent of Sri Lanka’s 21 million people, while the majority Sinhalese, who are Buddhist, make up nearly 75 percent of the population. The rest are Muslims and Christians.

Although their religion sets them apart, it is largely believed by Sri Lankans that Tamils collaborated with imperialist rule, and were thereby given preferential treatment by the British before the island’s liberation, a factor which has also caused resentment between the two factions.

At the height of their power, the Tamil Tigers controlled much of northern and eastern Sri Lanka. They had their own police force, law school, taxation system, navy, air force, and a de facto government headquartered in the city of Killinochi.

Defense ministry spokesman Keheliya Rambukwella said the government hoped to resettle the estimated 265,000 Tamils displaced by the fighting as soon as possible. But when they return to their villages, they will be accompanied by a heavy deployment of troops (Associated Press).

When the government declared Prabhakaran was dead, the LTTE chief for international relations said, “Our beloved leader is alive and safe. He will continue to lead the quest for dignity and freedom for the Tamil people” (The Times, London).

Critics said that while the SLA has defeated the LTTE, the minds of Tamils have yet to be won.