This website requires the use of Javascript to function correctly. Performance and usage will suffer if it remains disabled.
How to Enable Javascript
Media Promotes “Missing Link” 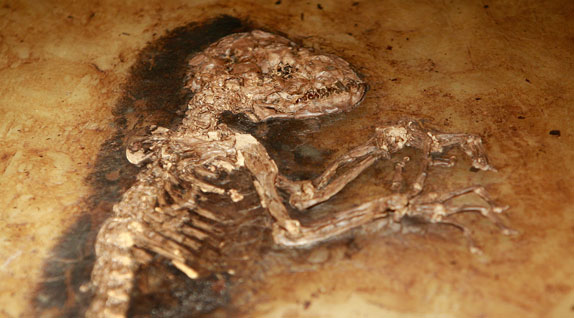 Mario Tama/Getty Images
Object of media frenzy: The 47 million-year-old fossilized remains of a primate—which paleontologists named “Ida”—is seen at the American Museum of Natural History in New York City (May 19, 2009).

With much media fanfare, a group of Norwegian paleontologists presented the findings of a secret study of a fossil dated to be 47 million years old. The Darwinius masillae, nicknamed “Ida,” is the most complete fossil of its type.

According to the New York Times article “Seeking a Missing Link, and a Mass Audience,” the May 12 unveiling was the “first stop in a coordinated, branded media event, orchestrated by the scientists and the History Channel, including a film detailing the secretive two-year study of the fossil, a book release, an exclusive arrangement with ABC News and an elaborate Web site.”

The Times also reported that A&E (parent company of the History Channel) paid more for this film than any other single documentary in its 25-year history.

Like many evolutionary discoveries, detailed drawings and diagrams have appeared to assert that the new fossil is an anthropoid primate—that is, a missing link to early primates and (as the theory claims) modern man.

However, the new fossil is actually an adapoid—a long extinct, well-documented primate that would be more similar to lemurs than chimpanzees.

Distinguished paleontologist John Fleagle stated, “…most of the evidence presented in the paper [about Ida] is old news” (The Loom science blog, Carl Zimmer).

The original research paper does not support the “missing link” presented by the media circus (emphasis ours): “Note that Darwinius masillae…could represent a stem group from which later anthropoid primates evolved, but we are not advocating this here, nor do we consider either Darwinius or adapoids to be anthropoids” (PLos ONE, “an international, peer-reviewed, open-access, online publication”).

Stark differences between the research and media events have caused confusion and doubt among the scientific community and the public.

In his article “The ‘Ida’ fossil: on missing links and media circuses,” John Timmer, science editor for Ars Technica, stated, “…I’d forgive the public if the received message were any one of the following: that scientists don’t know what they’re talking about, that they’ll say anything if it will get them into the news, or that they will skew the facts in order to cut a film deal.”

Opening a detailed window into the past may be fascinating to the scientific community, but intense media promotion, as well as already-signed book and movie deals, make the find appear to be more about financial payoff than a new scientific discovery.

To learn much more about the artistic and media leaps found in similar discoveries, read our article “Evolution Exposed: Deconstructing False Science – Part 5.”