This website requires the use of Javascript to function correctly. Performance and usage will suffer if it remains disabled.
How to Enable Javascript
Santa Barbara Fire Burns Nearly 9,000 Acres 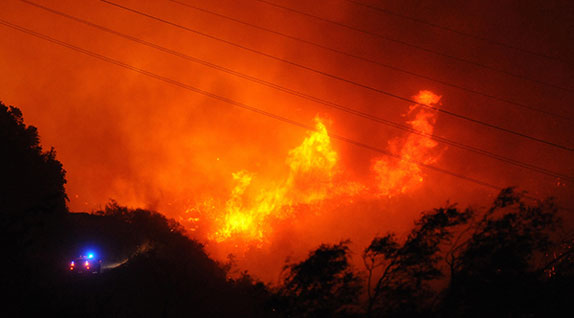 Mark Ralston/AFP/Getty Images
A police car keeps watch as strong gusty winds fan the Jesusita fire on a ridge above Santa Barbara (May 8, 2009).

Meanwhile, authorities shut down sections of three roads and a highway.

Emergency officials, who say the fire started near the Jesusita trail, suspect that sparks from a power tool used to clear undergrowth ignited the blaze. Gusts of wind up to 50 mph helped spread the flames through high, dry brush.

“The fire exploded last week with a combination of temperatures above 100 degrees, extremely low humidity and high afternoon winds that sent flames racing down canyons and into residential neighborhoods” (USA Today).