This website requires the use of Javascript to function correctly. Performance and usage will suffer if it remains disabled.
How to Enable Javascript
China Parades Its Naval Power 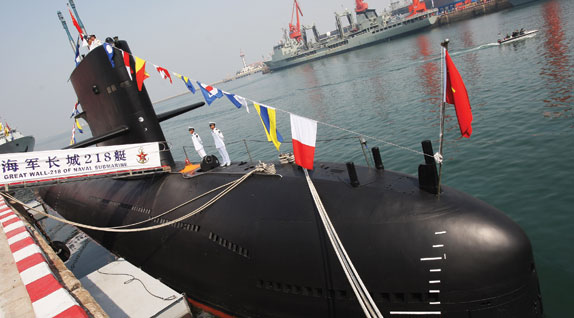 Guang Niu/Pool/Getty Images
Show of strength: Navy submarines dock at Qingdao Port in Qingdao of Shandong Province, China (April 22, 2009). The submarine was part of an international fleet review held to celebrate the 60th anniversary of the founding of the People’s Liberation Army Navy.

From the eastern port city of Qingdao, Beijing celebrated the 60th anniversary (April 23) of the founding of the People’s Liberation Army Navy (PLAN).

China’s President Hu Jintao stood on the bridge of a destroyer and waved to a maritime parade of 21 Chinese warships and naval aircraft, which 14 foreign navies accompanied, including the U.S.S. Fitzgerald, a guide-missile destroyer.

Assuring that his country would always be a force for preserving world peace, Mr. Hu said, “China will not engage in military expansionism nor an arms race, and will never constitute a military threat to any other nation” (Reuters).

Vice Admiral Ding Yiping, deputy commander of China’s navy, said that PLAN does not pose a threat to other nations. “The PLA Navy will continue to make contributions to maintain world, regional and maritime peace,” he said (Xinhua).

Shi Yinhong, a professor of international relations at Renmin University in Beijing said, “China does need a stronger navy to project its power. Even if we can’t surpass the United States, a stronger navy can help to counter that influence and protect China’s own interests” (Reuters).

Professor Shi added, “Showing the country’s military strength is also popular with the public. This parade is also meant to consolidate domestic support for greater spending on the navy.”

China publicly displayed two nuclear submarines for the first time—Long March subs, which can fire ballistic missiles to areas far from China’s shores. PLAN has 250,000 sailors, submariners and airmen, and operates up to 10 nuclear-powered and 60 diesel-electric subs.

Nations in the region of the South China Sea—Japan, South Korea, Vietnam, the Philippines and others—worry China may be developing its first aircraft carrier.

Admiral Gary Roughead, U.S. chief of Naval Operations, said, “If it is not clear what the intent is of the use of an aircraft carrier, I would say that it may cause concern with some of the regional navies and nations” (Associated Press).

But governments worry that an aircraft carrier might also embolden China in settling sea boundary disputes.