This website requires the use of Javascript to function correctly. Performance and usage will suffer if it remains disabled.
How to Enable Javascript
Global Financial Crisis: An International Snapshot 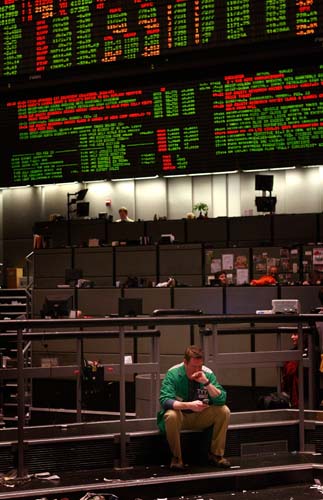 Scott Olson/Getty Images
DOW reaches six-year low: A trader takes a break following the close of trading in the Standard & Poor’s 500 stock index futures pit at the CME Group in Chicago, Illinois (Feb. 20, 2009). The major indexes closed down but well off their lows after the White House tried to calm worries that the government would nationalize crippled banks.

The U.S. Congress passed the White House-backed $787 billion stimulus package, whose bailout programs could cost $9.7 trillion tax-payer dollars over the next ten years—an amount just $1 trillion short of the total amount of national debt. The estimated budget plan by President Barack Obama would boost the deficit more than $1.75 trillion, the highest it has been since World War II. The Dow fell to its lowest level since 1997.

Automakers, media outlets and other businesses face bankruptcy, job losses, closings and restructuring. The following is an international snapshot of the world-at-large:

Automakers: Germany announced it will lend funds to Opel, due to financial troubles at parent company General Motors (GM). According to German news media, the carmaker, which employs some 25,000 people, will face bankruptcy “as soon as May or June if it does not receive a credit boost from the state” (AFP). For Opel to survive, it reportedly needs at least 3.3 billion euros ($4.2 billion).

Swedish automaker Saab, also owned by GM, filed for bankruptcy protection so it can either restructure as a separate company or be sold off.

The British government turned down van maker LDV’s request for a $43.6 million bridge loan. The decision threatens to close the Birmingham manufacturing plant and eliminate 850 staff, including thousands of linked jobs.

Peter Parks/AFP/Getty Images
Joblessness in China: Migrant workers, with their skills written on pieces of paper, try to find work at a labor market in Chengdu, the capital of China’s southwest Sichuan province (Feb. 5, 2009). As millions of the migrant workers across the nation returned to cities and manufacturing areas from Lunar New Year holidays this week, the government warned at least 20 million others were jobless due to the crisis.

Bankruptcy: With a dwindling readership, fewer advertisers and more people relying on the Internet for information, newspapers are shrinking their number of pages, downsizing staff, seeking bankruptcy protection and even going out of business.

In an attempt to restructure its debt, estimated at $390 million, the parent company of two major U.S. newspapers, the Philadelphia Inquirer and the Philadelphia Daily News, filed for bankruptcy protection. The E.W. Scripps Co., citing multi-million dollar losses, announced the closure of its Denver daily, Rocky Mountain News one day before the almost 150-year-old newspaper produced its last issue. The San Francisco Chronicle, owned by the Heart Corp. is also debating a possible shutdown, which could result in a loss of more than 200 jobs.

The Ritz Camera chain was another casualty of the changing times of instant technology, with film sales plummeting while digital cameras and related equipment rose. Ritz Camera filed for Chapter 11 bankruptcy protection.

Even the world of glamour was not immune to the current economic downturn. Modeling agency Irene Marie Models, famous for launching the careers of several supermodels, closed its doors and is seeking bankruptcy protection.

Economic meetings: Prior to the G20 meeting in London on April 2, European leaders met at Berlin, Germany, and agreed that “all financial markets, products and participants must be subject to appropriate oversight or regulation” (Reuters).

Mario Tama/Getty Images
Home prices and foreclosures: Toll Brothers slashed prices on condos by as much as 37 percent following a housing downturn in the New York metropolitan area.

Joe Raedle/Getty Images
Evicted from their foreclosed home, a family of four live in their van.

Joblessness: China saw its highest urban unemployment rate in five years, while the number of jobless claims in the U.S. reached an all-time high.

America’s largest tire maker, Goodyear Tire & Rubber Co., plans to cut nearly 5,000 jobs in 2009, while Germany is expected to lose 5,000 jobs and the European Union is projected to lose 3.5 million.

Property: The New York metropolitan area is seeing slashed prices on luxury condos. On the other hand, with fewer customers and less sales, more small businesses are receiving eviction notices due to failure to pay rent.

States are beginning to plan how to use their share of the stimulus package. Florida is developing a road-widening project, and part of New York’s money will be used to support public housing projects, and social welfare programs like Medicaid.

Economic outlook: Global analysts agree that infusing large monetary quantities into the world economy will help it to recover, but worry that the global community will not be able to repair itself quickly enough.

In response to the changing times, Media baron Rupert Murdoch warned his staff, “We are in the midst of a phase of history in which nations will be redefined and their futures fundamentally altered.”