This website requires the use of Javascript to function correctly. Performance and usage will suffer if it remains disabled.
How to Enable Javascript
Does Technology Stunt Children’s Social Development? 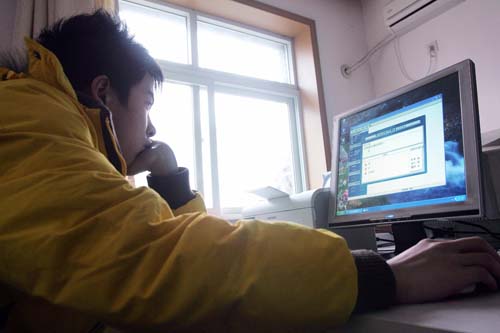 AFP/Getty Images
Internet addiction: A Chinese teenager uses a computer without online games at the Internet Addiction Treatment Centre in the southeastern suburb of Daxing in Beijing, China. The nation had an estimated 2.5 million Internet addicts in 2007.

An increasing number of top scientists and researchers are questioning the effects on children of spending excessive amounts of time using modern technology, particularly social networking websites and cellphone text messaging and their influence on the formation of basic skills of human interaction.

Neuroscientist Susan Greenfield of Oxford University detailed her concerns regarding social networking sites such as MySpace, Facebook and Twitter to the United Kingdom Parliament.

Baroness Greenfield said that while social networking websites give the user a feeling of acceptance, she worried that the activity distanced children “from the stress of face-to-face, real-life conversation.”

Online, children and teenagers can have hundreds of “friends” without having to leave their home or open their mouths.

“Real-life conversations,” Baroness Greenfield continued, “are, after all, far more perilous than those in the cyber world. They occur in real time, with no opportunity to think up clever or witty responses, and they require a sensitivity to voice tone, [and] body language…”

The worries do not stop with social networking sites. A recent study found that heavy Internet use may increase violent and aggressive behavior. The study, published in the Journal of Adolescent Health, documented the Internet use patterns of 9,405 Taiwanese teenagers. Researchers labeled 25 percent of males and 13 percent of females as Internet addicts. Among these, 37 percent reported aggressive behavior within the last year, compared to less than 23 percent for all teens.

The researchers’ criteria for Internet addiction included “withdrawal” symptoms—irritability and moodiness when not online, being preoccupied with Internet activities and foregoing physical activities for more time online.

Some experts argue the study does not prove that Internet addiction causes aggression, but the findings do fit with previous research showing technology can negatively influence children’s behavior.

A Washington Post article questioned the effects of cellphone text messaging on children’s social development. The article documented the “text life” of a 15-year-old American girl who “texts at home, at school, in the car, while her mother is driving…during homework, after pompom practice and as she walks the family dog.” The teen takes her cellphone to bed.

During one month she sent and received 6,473 messages.

“I would die without it,” the teen told the Washington Post.

Of the over 75 billion text messages sent monthly in the U.S., teens ages 12–17 send the most, with an average of 2,272 texts each month per teen, according to Nielsen Co.

While the ability to text does aid in the planning of picking up kids from school or letting a parent know a child arrived home safely, many researchers say the phenomenon of a “text life” does impact children’s social interactions.

“Addicted or not, hard-core texters find it difficult to be ‘in the moment’ with other people because they are constantly being summoned by someone else in another place, said Naomi Baron, professor of linguistics at American University” (Washington Post).

The teen mentioned above also admitted her 200-plus-message-per-day habit does impact her family life. “If I really look into it, I think it is affecting my focus and my closeness with my family,” she said (ibid.).

Despite being too early in the digital age to understand the definitive effects from growing up interacting with cellphone keypads and computer screens, the exchanges lack the depth and complexities of face to face conversations.

In her concluding statement to the UK Parliament, Baroness Greenfield said that while digital interactions are enjoyable, the “experiences are devoid of cohesive narrative and long-term significance.”