This website requires the use of Javascript to function correctly. Performance and usage will suffer if it remains disabled.
How to Enable Javascript
Fires Devastate Australia 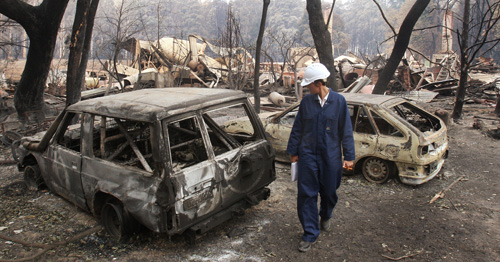 William West/AFP/Getty Images
A homestead lies in ruins after being destroyed by fire at Narbethong, about 75 miles northeast of Melbourne, on February 12, 2009.

Australia is battling its worst natural disaster in 110 years, with more than a dozen fires burning out of control and claiming up to 181 lives, leaving many bodies unidentifiable. Officials expect the death toll to exceed 200.

Authorities suspect arson, a crime that could bring manslaughter or murder charges to anyone found guilty. “The thought that some of the devastation was man-made is, to many locals, incomprehensible” (BBC).

“‘The laws of the state provide that they can be put away and put away for life,’ said Prime Minister Kevin Rudd. ‘My own personal view is they should be allowed to rot in jail. This is unspeakable murder on a mass scale’” (Reuters).

According to current reports, the bushfires have left more than 4,200 homeless, injured around 500 people, destroyed nearly 1,000 homes, and devastated about 865,000 acres of land.

Prime Minister Rudd pledged to rebuild towns devastated by recent floods and those destroyed by bushfires.