This website requires the use of Javascript to function correctly. Performance and usage will suffer if it remains disabled.
How to Enable Javascript
Will Global Unemployment Rise? 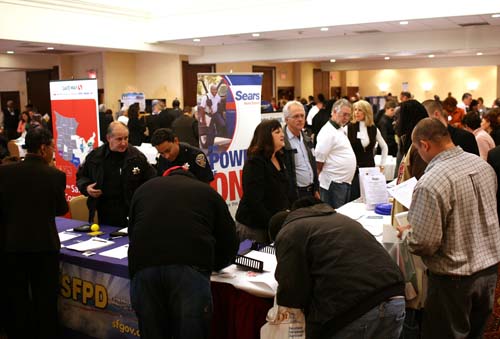 Justin Sullivan/Getty Images
Signs of the times: More than 1,200 job seekers meet with potential employers at a job fair, in Concord, Calif., geared toward unemployed construction, real estate and mortgage workers (Dec. 17, 2008); the event was expected to draw just 400 people.

Global unemployment will increase by 50 million worldwide if economic conditions continue to deteriorate, a report by the International Labor Organization revealed.

“By the end of 2008 working poverty, vulnerable employment and unemployment were beginning to rise as the effects of the slowdown spread. If the recession deepens in 2009, as many forecasters expect, the global jobs crisis will worsen sharply,” it stated.

“Caterpillar, the world’s largest maker of construction equipment, said it would cut 20,000 jobs as it reported fourth-quarter profits more than 32 percent lower than a year ago and warned earnings would be under pressure in 2009. The news comes a month after the U.S. group slashed executive salaries by up to half and cut jobs at large plants” (Financial Times).

The global economic crisis is affecting both individual lives and the livelihood of corporations.

In a time when newspapers across the United States are suffering from dwindling advertising revenue, The New York Times was forced to sell display ad space on its front page.