This website requires the use of Javascript to function correctly. Performance and usage will suffer if it remains disabled.
How to Enable Javascript
World Reacts to Obama Inauguration 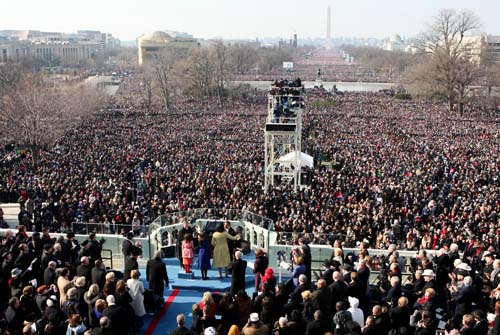 Nancy Stone/Chicago Tribune/MCT
A new era begins: President Barack Obama kisses his wife, Michelle, with daughters Sasha and Malia at his side, after being sworn in as the country’s 44th President by Chief Justice John Roberts, left, at the U.S. Capitol in Washington, D.C. (Jan. 20, 2009).

The world watched, through television and the Internet, as 47-year-old Barack Obama was sworn in as the 44th President of the United States, Jan. 20, 2009.

France’s President Nicolas Sarkozy, in a letter congratulating the new President Obama, wrote, “With your election, the American people expressed with vigorousness its faith in progress and the future, as well as its wish for an open, new, strong and united America that you embody.

“At the moment when you take up your functions, I wish to address to you, in my own name and that of the French people, my wishes for every success in your mission at the head of the American people.”

“I also wish to assure you that France is determined to work hand in hand with America, its friend and ally, so that we can together overcome the immense challenges which confront our world today.”

The Chicago Tribune wrote, “One of Obama’s first challenges will be to improve relations with the Muslim world, a task that has grown much tougher because of accusations that Obama remained silent while some 1,300 Gazans died during Israel’s three-week offensive.”

Al Arabiya said of the new presidential administration, “For the Arab World, it looks like that President Barack Obama is determined to change our world that is the world as created by his predecessor George W. Bush. The relationship between the Middle East and America, in the past eight years has been based on mutual suspicion and mutual disrespect…

“President Obama, in his first ever interview with any network, including American stalwarts such as CNN and Fox News was with Arabic language news channel Al Arabiya. In it Obama told us that he understands the Muslim world, he has family members who are Muslims, and he had lived in the Muslim world, in Indonesia…

“Obama’s remarks during his inaugural address in which he addressed the Muslim World directly by placing emphasis on promoting a different kind of America, America that wants a relationship of mutual respect and mutual interests. Obama’s first ever phone call as a president to a foreign leader was to Mahmoud Abbas the Palestinian Authority president and his first ever interview was to an Arabic network. This shows the intensity and seriousness of how Obama’s Middle East policy will look like.”