This website requires the use of Javascript to function correctly. Performance and usage will suffer if it remains disabled.
How to Enable Javascript
Israel Strikes Back at Hamas With “Iron Fist”

Israel Strikes Back at Hamas With “Iron Fist”

Palestinian officials have reported over 537 dead and nearly 2,000 wounded.

The escalation followed expiration of a ceasefire treaty between Israel and Hamas on December 19. 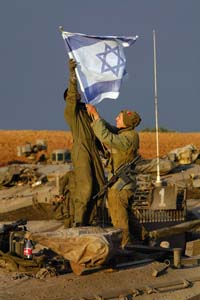 David Silverman/Getty Images
Israeli soldiers hang their flag on their tank among scores of other military vehicles preparing for the ground invasion.

The Associated Press described the scene as dawn broke after the first two days of bombing, “strong winds blew black smoke from the bombed sites in Gaza City over deserted streets. The air hummed with the buzz of pilotless drones and the roar of jets, punctuated by the explosions of new airstrikes.”

The majority of the over 300 targets have been symbols of Hamas rule in Gaza, in what Prime Minister Olmert called striking the group “with an iron fist.” The strikes have included the government building for the Interior Ministry and one attack that killed a Hamas military leader. Israeli warships also aimed their fire on Hamas-run structures in Gaza Port.

An eyewitness of the Gaza bombings told CNN: “There was a loud series of explosions…the entire apartment I’m in was shaking…It was scary and a very disappointing position to be in for the ‘nth’ time.”

During the attacks, Israel estimates it has already destroyed one-third of Hamas’s rocket arsenal. However, daily rocket attacks continue in Israeli cities along the shared border with Gaza.

The United Nations Security Council said the airstrikes should cease immediately, and the United States has called for Hamas to stop firing rockets and renew the truce.

Israeli Defense Minister Ehud Barak explained the offensive would continue until Israel was assured that towns along the Gaza border would be free from surface missile attacks.

“I don’t want to delude or deceive anyone; this will not be a short operation,” he said. “The war on terrorism is an ongoing one, and we will have to stand firm in order to change the situation in the south” (CNN).

Israeli Cabinet Minister Binyamin Ben-Eliezer told Army Radio, “If we withdraw today, without reaching some kind of comprehensive agreement, we haven’t done anything…The military has to carry on with its work” (AP).