This website requires the use of Javascript to function correctly. Performance and usage will suffer if it remains disabled.
How to Enable Javascript
POW Exchange Brings “Tears of Joy, Pain” 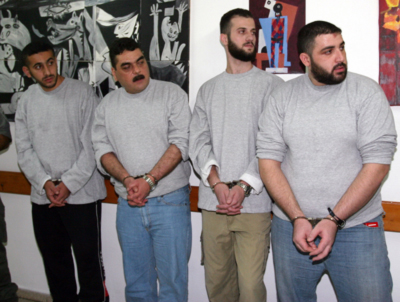 Israel Prison Authority via Flash 90/MCT
Lebanese militant prisoner Samir Kantar (second from left), with three other prisoners from Hezbollah, were escorted by border policemen before leaving the Hadarim prison near the Israeli coastal city of Netanya early Wednesday, July 16, 2008.

The International Committee of the Red Cross mediated the exchange, an agreement that came about after two years of Germany and the United Nations mediating between the opposing parties.

On July 12, 2006, Lebanese militants captured Israeli servicemen Eldad Regev and Ehud Goldwasser to demand the release of Samir Kuntar, the longest-serving Arab prisoner in Israel—triggering the 34-day Second Lebanon War, which killed more than 1,200 people in Lebanon and 160 Israelis.

Due to their deteriorating state, it took hours to identify the bodies of the Israeli reservists. A Hezbollah official said the soldiers died sometime later of the injuries they received during the cross-border raid that led to their capture.

Among the five prisoners Israel handed over was Samir Kantar, a Palestine Liberation Front militant who had been in prison since 1979 for the brutal murders of three Israelis—including a four-year-old girl who was battered to death with a rifle butt—during a terrorist raid. The other prisoners released in the swap—Khaled Zidan, Maher Kurani, Mohammed Sarur and Hussein Suleiman—were captured during the 2006 Second Lebanon War.

Hezbollah claimed the exchange as a victory, and Lebanon declared a national holiday to mark the event, including a red carpet ceremony, jubilant crowds, patriotic songs, speeches, flag waving and banners. “Lebanon is shedding tears of joy,” one banner read. “Israel is shedding tears of pain” (BBC).

“I cannot understand what the Lebanese are so glad about and happy about,” said Shlomo Goldwasser, father of Ehud Goldwasser. “They sacrificed over 700 of their best warriors and all their economy, and what they get for what they did is a murderer, a bloody murderer of a three-and-a-half-year-old girl and her father—and for this they are making all this glory, for this they sacrificed so much. So I feel only pity for them” (BBC).