This website requires the use of Javascript to function correctly. Performance and usage will suffer if it remains disabled.
How to Enable Javascript
Increased Ethanol Production Worsening Gulf of Mexico “Dead Zone” 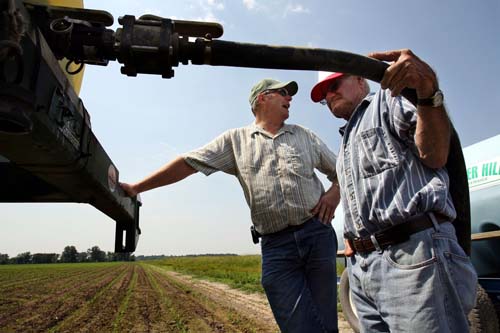 St. Louis Post-Dispatch/MCT
Ethanol Boom: A farmhand (right) fills a spreading tank with liquid nitrogen fertilizer as he speaks with a farmer who, in 2007, raised 400 acres of corn in anticipation of higher corn prices, banking on the continuation of the ethanol boom.

The continued increase of corn-based ethanol production in the United States will have an undesired side effect: increasing the Gulf of Mexico’s “dead zone,” according to a report by professors from the University of British Columbia and the University of Wisconsin.

Nitrogen and phosphorous from fertilizers used by corn farms in the Midwest, including Illinois, Iowa, Nebraska and Wisconsin, are seeping into the Mississippi River and pouring into the Gulf, feeding the overgrowth of algae, which consumes much of the oxygen in the water as it decomposes. This process leaves a “dead zone” in which marine plant and animal life cannot survive. During recent years, the dead zone has expanded to more than 7,722 square miles—an area equivalent to the size of New Jersey.

The U.S. Senate recently announced a policy of producing 36 billion gallons of ethanol per year by 2022, with 15 billion from cornstarch. This goal is more than three times the production for 2006.

“This rush to expand corn production is a disaster for the Gulf of Mexico,” said Simon Donner, an assistant professor in the University of British Columbia Department of Geography and researcher for the report. “The U.S. energy policy will make it virtually impossible to solve the problem of the dead zone.”

The study involved comparing the projected farmland requirements to meet the rising demand for corn-based ethanol to the amount of nitrogen that the river system and Gulf can naturally return to the atmosphere. They found that if the government’s purposed goal is met, the nitrogen levels passing from the Mississippi into the Gulf of Mexico would rise by 10-19%.

“This result confirms our suspicion that there’s a significant tradeoff to the expanded production of ethanol from corn grain,” said Chris Kucharik, a scientist with the University of Wisconsin's Nelson Institute for Environmental Studies. “It also shows that we need to continue considering our options for other biofuel feedstocks. And when we do, we need to keep the greater impacts on ecosystems in mind.”

Most ethanol in the U.S. is produced from cornstarch, but the biofuel can be made from a wide variety of crops, such as soybeans and sugarcane.

The scientists conclude that if ethanol production goals are to be reached, as well as reaching previously set U.S. goals to reduce the dead zone, there must be a substantial reduction in the amount of corn that is grown for animal feed and meat production. Without substantial changes to America’s farming practices, the report found, there will be a 95% probability of failure to meet the goals of dead zone reduction. 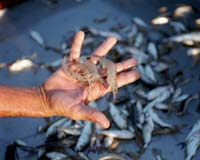 Marine Dead Zones
Pollutants are disrupting the ecology of the world’s waterways, creating massive ocean “dead zones” in which animals cannot survive. The economic impact is already being felt in the fishing industry and many forms of marine life are at risk.