This website requires the use of Javascript to function correctly. Performance and usage will suffer if it remains disabled.
How to Enable Javascript
Marine Dead Zones

Pollutants are disrupting the ecology of the world’s waterways, creating massive ocean “dead zones” in which animals cannot survive. The economic impact is already being felt in the fishing industry and many forms of marine life are at risk. 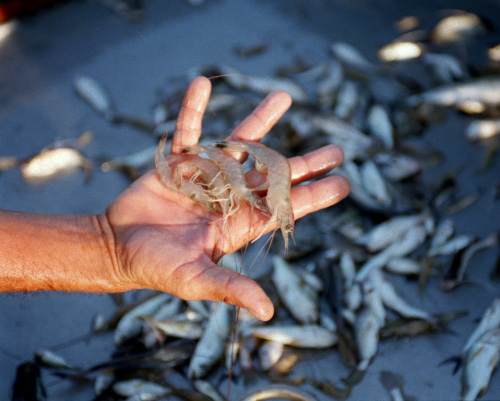 Off the shore of every continent, swaths of bacteria rob oxygen from thousands of miles of ocean, killing sea life.

Pollutants disrupt the ecology of the world’s waterways creating massive ocean “dead zones” where animals cannot survive. The economic impact is already being felt in the fishing industry and many forms of marine life are at risk.

The most famous of these dead zones is in the Gulf of Mexico, which spreads from the mouth of the Mississippi to other rivers along the coast where fertilizers and other chemicals are deposited. During the worst seasons, it is said much of the Gulf, from the Mississippi River to the border of Mexico, is robbed of oxygen, destroying marine life in the area.

There is a theory that the problem is merely an annually occurring natural phenomenon—each summer, algae blooms, which causes dead zones, but every winter it recedes.

However, the problem seems to worsen each year, and many fear that the damages may be permanent.

Many of the chemicals and fertilizers dumped into rivers are high in phosphorous and nitrogen. Phosphorous is a key ingredient in the formation of certain algae, particularly phytoplankton. These algae are natural stabilizers that help chemically balance the rivers and seas. By feeding on phosphorous and other chemicals, the algae preserve the aquatic environment for other creatures.

In addition to the abundant phosphorous, the growth of algae is stimulated by massive doses of sunlight. This is one of the major reasons colonies of algae are appearing where rivers flow into the oceans—where they can receive plenty of sunlight over a wide area.

After consuming various chemicals, the algae eventually die and drop to the bottom of the waterways. The cleanup then continues through bacteria. Bacteria work to break down and digest algae, releasing carbon dioxide and processing large quantities of oxygen.

However, what is unnatural in the case of the dead zones is the scale in which the process is occurring. The massive doses of phosphorous and nitrogen released into the world’s waterways lead to tremendous colonies of feeding algae, which generate large colonies of bacteria that feed on algae. The area filled with bacteria is so gigantic that thousands of miles of ocean become devoid of oxygen, as all of it is consumed in the process of breaking down the algae.

In the end, animal life suffocates—unable to escape the rolling cloud of dead water. Processing such vast amounts of harmful chemicals causes numerous diseases and deformities in fish, crabs and other marine animals.

According to a United Nations report, the number of dead zones worldwide is nearly 150—and growing. Many of these areas are subject to a seasonal ebb and flow. During the summer, additional rain spreads the chemicals, and increased sunlight provides ideal conditions for algae to blossom. Affected areas generally have less active currents, restricting the ability of water to circulate and replace oxygen.

The worst affected areas are those with an abundance of runoff from industry and agriculture, mostly in Europe and on the U.S. East Coast.

Dead zones can range in size from a single square mile to 45,000 square miles. In addition to the massive zones at the mouths of great rivers, they are also spreading in large lakes and seas, including Lake Erie, the Baltic Sea, Chesapeake Bay, the Black Sea and the northern Adriatic Sea. Other areas that are affected around the world include South America, Australia, New Zealand, China and Japan.

Not only is local sea life damaged, but the effects of the mutant local ecologies within the dead zones are spreading throughout the world. Certain less-tolerant fish and creatures are being killed, while those that are able to tolerate poisons, as well as those that feed on algae or resultant bacteria, multiply.

This unbalance has a destabilizing effect on other creatures that rely on the affected life for food. In addition, other life may run rampant—unchecked—when its natural predators are destroyed. This could potentially wreak havoc on global ecosystems since all life is interdependent.

All of this destabilization disrupts the earth’s delicate ecosystems. The ability of various interrelated plant and sea life to withstand repeated widespread disruption is unknown. However, it is widely speculated that once the destruction reaches a certain threshold, the damage will become irreversible, wiping out entire ecosystems—potentially leading to mass extinctions.

Many are familiar with the concept of a “food chain” or a “food web.” These depict the flow of energy, or food, throughout an ecosystem or related group of organisms. At the bottom of the food chain are always the producers—organisms that receive their energy from the sun (and sometimes thermal vents at the bottom of the ocean). Moving up the chain are different levels of consumers—creatures that receive their energy by preying on others. A simplified example of a food chain would be: a plant produces energy from the sun; an ant eats the plant; a spider eats the ant; and a bird eats the spider.

The continued existence of all the related organisms depends on there being neither too few nor too many of the organisms in any tier of the chain. This interdependence among the different organisms within an ecosystem is called ecological balance. Generally speaking, any ecosystem will maintain ecological balance, unless something artificially changes the number of creatures at any level of the food chain.

Going back to our example, if some kind of chemical were released that only affected spiders, then there would be too few spiders to keep the population of the ants from exploding. Then, with there being too many ants eating the plants, the ants would eventually consume all of the plants. This would then kill off the ants, as they would have nothing to eat. This would then lead to the death of the spiders, with no ants to eat. And finally the birds would perish, without any spiders to prey upon.

The concept of ecological balance applies not only within a single ecosystem, but also among the different ecosystems on the planet. Since creatures are able to feed on more than one food source, an organism whose normal food supply runs out will begin to search elsewhere, thereby encroaching on another ecosystem. If one ecosystem is significantly unbalanced, it can lead to the destruction of other related ecosystems.

Since all life on earth is related in this way, it is possible for significant destruction in one area of life to impact other organisms on the planet.

Likewise, even if the problem does not reach such a catastrophic magnitude there will still be significant effects. For instance, the economic impact of entire seas being depopulated would doom local fishing industries. Nearby fisheries would find much of their catch damaged and diseased by the unnatural preponderance of chemicals, algae and bacteria. These defective fish could lead to diseases in people and animals, causing health problems and economic and ecological difficulties throughout the planet.

For many, the warnings about mankind destroying the planet seem all too familiar: “Man’s overindulgence is damaging the environment” and “The damage may be catastrophic.” But the typical reaction is: None of these things have ever affected me. Therefore, none of them ever will. These warnings seem like just another instance of “the boy who cried wolf.”

But the problem remains—humanity does not really know how much this planet can take. Most choose to hope for the best, essentially sticking their heads in the sand and pretending nothing is happening. Others do not care, thinking life is too short to worry about such things. Finally, a third group jumps in the other ditch and devotes their entire life to “speaking out” and “making the earth green again.”

Ironically, recent reports have indicated that the dead zone issue is actually being exacerbated by the turn to ethanol, which comes from corn. The increased production of corn is leading to more runoff into the world’s waterways. While trying to help in one area, mankind is ruining another.

Daily it becomes more obvious that man is damaging the world around him. If it’s not the seas, it’s the skies; if it’s not the skies, it’s the lands; if it’s not the lands, it is even space that is being polluted. Just like any home or vehicle subject to continual abuse, the environment will eventually wear out and no longer function correctly. All together, these things point to a major problem—a problem that no one has been able to solve.

All kinds of solutions will be offered to try to combat this and other problems. There are, and will continue to be, many quick-fix remedies that will look good, yet fail to deliver—they always have. However, there is a solution. But it will not come from where you might think.

Instead, to know the true solution, you must first recognize the problem. To understand, read Why Man Cannot Solve His Problems.