This website requires the use of Javascript to function correctly. Performance and usage will suffer if it remains disabled.
How to Enable Javascript
South American Relations Remain Volatile After Standoff 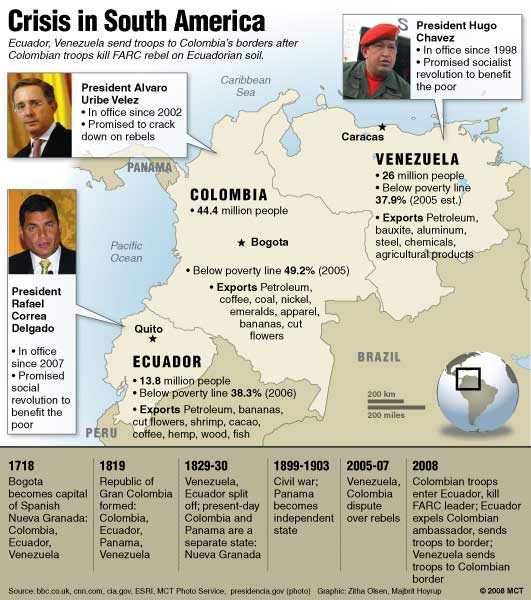 Relations between Ecuador, Colombia and Venezuela remain fragile following their national leaders’ agreement to reinstate diplomatic ties at the close of the Rio Group Summit of Latin American Leaders, held in the Dominican Republic. The three countries’ relationships had been on shaky ground since Colombian forces crossed into Ecuador, killing more than 20 rebels, including Raul Reyes, the second in command of the left-wing military terrorist organization the Revolutionary Armed Forces of Colombia (FARC).

Before the compromise, the conflict threatened to divide the continent, with each leader having hurled insults at the others via the press before the start of the conference.

“We are walking on the path of peace in Latin America and the Caribbean, but the government of Colombia wants war,” said Venezuelan President Hugo Chavez before meeting with other leaders (AFP).

But by the close of the summit, leaders from across Central and South America heaved a collective sigh of relief as they watched the trio shake hands and smile at one another.

Earlier in the week, Mr. Chavez, along with Ecuadorian President Rafael Correa, expelled Colombia’s ambassadors from their countries and sent forces to the border. After severing all diplomatic ties with the nation, Mr. Correa immediately began visiting with leaders from several South American countries to drum up support for Ecuador’s stance against Colombia.

“We coincide in the rejection of any action that constitutes a violation of territorial sovereignty,” Mexican President Felipe Calderon was quoted by Reuters after meeting with Salvadoran President Tony Saca in San Salvador at the start of the conflict.

The BBC News reported that originally Mr. Correa was frustrated by the buildup of forces because he had been close to negotiating the release of past Colombian presidential candidate Ingrid Betancourt, whom Colombian rebels have held captive since 2002.

Contrarily, Colombian President Alvaro Uribe claimed that Mr. Correa funneled thousands of dollars into the paramilitary group FARC. Alerting Ecuador about the air raid would have compromised the situation, he said.

Mr. Uribe also asked the International Criminal Court to bring charges against Mr. Chavez, claiming the Venezuelan government recently donated $300 million to FARC, which is classified by the U.S. and the European Union as a terrorist organization.

Local Dominican news media reported that at the opening of the summit, Mr. Uribe refused to use the same door as other arriving presidents or pose for the annual photo, which showed the other leaders smiling and waving for the camera, including Mr. Correa, who displayed a “thumbs up” gesture. Mr. Uribe was the only Latin American leader not present for the photo.

The gathered leaders remained edgy during the conference as tension between the three leaders intensified. But by the end of the summit, the two leaders reached a compromise: Colombia would never again breach another nation’s sovereignty and would not bring charges against Mr. Chavez, if Venezuela agreed to remove the 10 battalions of more than 6,000 men it sent to Colombia’s border, as well as reinstate diplomatic ties with its southern neighbor.

Surprisingly, Mr. Chavez, who immediately sent troops to the border after hearing about the air raid, mitigated the compromise at the summit, calling for calm between the two leaders and putting an end to what some have termed the worst diplomatic crisis to confront South America in many years.

As Dominican Republic President Leonel Fernandez placed both his hands on each of the leaders’ backs at the close of the summit, they shook hands and promised not to infringe on each other again.

“With the commitment of never attacking a brother country again and by asking forgiveness, we can consider this very serious incident resolved,” Mr. Correa said before shaking hands with Mr. Uribe as other presidents applauded (AFP).

In return for Colombia’s apology, Venezuela, Ecuador and Nicaragua restored Colombia’s diplomats to their respective countries.

During the past four decades, Colombia has been ravaged by war from three rebel paramilitaries: National Liberation Army (ELN), United Self-Defense Forces of Colombia (AUC) and the FARC, a group based on Marxist ideology that has been fighting for increased wealth distribution in Colombia.

However, since Mr. Uribe took power, many Colombians credit him with helping to quell the conflict, dispersing the drug trade and disarming the varying paramilitary groups.

During the crisis, the backlash against Colombia solidified the country’s internal resolve. While rallies were held across South America protesting Colombia’s disrespect of Ecuadorean sovereignty, Colombian denizens in the capital city of Bogota spoke against the actions of the trio that cut ties with their country.

“‘Chavez shouldn’t talk in such a vulgar way about our president. That hurts us,’ said Marina Narvaez, who said she attended the rally because she had survived being forced off her land by paramilitaries in the Cordoba state” (Los Angeles Times).

Supporters of Mr. Uribe said he has helped bring economic security and relative peace to the country. His popularity was affirmed in a government poll that showed “Uribe’s popularity has climbed since the raid to an 83% approval rating” (ibid.).

“Leaders should talk among themselves to resolve things,” said accountant Rafael Escobar in an interview with the LA Times. He said he did not agree with how Mr. Uribe had handled the situation, but he was equally disappointed with Mr. Correa’s decision to garner support from other leaders.

To some Colombians, it appeared Mr. Chavez was only out to humble Colombia. Upon his arrival to the summit, Mr. Chavez told Reuters that Colombia needed to rid itself of its pride.

“Colombia’s government should accept a condemnation with humility like a good neighbor who commits an error and promise not to follow Bush’s imperialist doctrine anymore,” he said. But the anti-U.S. rhetoric and insults against Colombia, which have been hurled from Venezuela and Ecuador during the crisis, have caused some to wonder if Colombia will be able to forgive other leaders as well.

For others of various Central and South American nations, the summit symbolized the continent’s ability to deal with its problems internally and the growing ability of leftist leaders to influence other Latin American nations.

“The summit showdown underscored Latin America’s swerve to the left in recent years—and the increasing isolation of Colombia’s center-right government, Washington’s strongest ally in Latin America,” wrote Associated Press writer Jonathan Katz. “The United States was the only country in the Americas to offer Colombia unqualified support in the dispute.

“Correa, Chavez and Nicaragua’s Daniel Ortega, all leftists aligned against Washington, were the most strident in confronting Uribe, but even more centrist leaders from Argentina, Brazil and Chile lectured him.”

Historically, armed squabbles between certain Latin American nations have arisen, but have not come so close to erupting in conflict like the most recent one.

For now, the 20 leaders who attended the Rio Summit are satisfied that the crisis ended in handshakes. However, it remains to be seen if the fragility of certain nations’ relationships will be shattered in the future by another standoff between a U.S.-backed country and one who more closely identifies with Latin American leftist ideology.