This website requires the use of Javascript to function correctly. Performance and usage will suffer if it remains disabled.
How to Enable Javascript
Kenya Rocked With Violence After Election Results 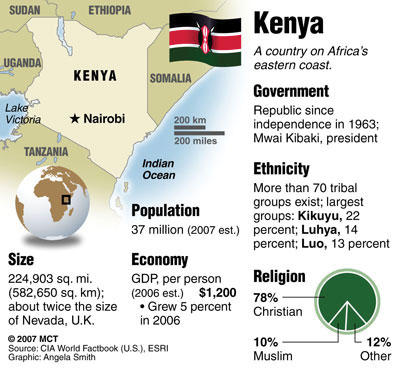 Citizens across Kenya have taken to the streets to protest the country’s recent election results. Almost 300 Kenyans nationwide have been killed and scores of others have been injured.

The election has sparked concerns of civil war and threatens to split the country ethnically. As Mr. Odinga is a member of the Luo tribe, many of his supporters (also Luos) have clashed with followers of Mr. Kibaki (the Kikuyus), provoking even more violence as ethnic differences surface. In the coastal city of Mombasa, six Kikuyus were hacked to death, while others have fled to neighboring Uganda seeking refuge.

In several slums throughout Nairobi and Kisumu, along with other villages throughout the country, protestors set fires and looted stores and homes. Reacting to the protests, throngs of police fired live rounds into the air, and beat villagers or anyone loitering outside their homes. Since the elections, police have urged Kenyans to remain indoors or face arrest.

The continued violence by citizens has been fueled by the aggressive reaction of government forces. Police wielding white batons and gray metal shields have been accused of beating and killing citizens not directly involved in the protests. The violence has not only affected those protesting the election, but also young mothers and children as well. In Kisumu, western Kenyan, one of the cities hardest hit by the violence, two women and three children were killed, and a BBC report showed several Kenyan mothers wiping tear gas off the faces of their infant children who had become innocent victims of police spraying in Nairobi. Other reports showed pregnant mothers fleeing from beatings by law enforcement officers.

The European Union along with members of the African Union have expressed serious concerns about the nature of the election after reports surfaced that there were multifarious instances of voter inconsistencies in several large voting constituencies across Kenya.

Mr. Kibaki, who was sworn in for a second and final term less than an hour following his electoral victory, was dismissed by Mr. Odinga, who asserts the election was a fraud.

“We are not intimidated by the prospect of arrest, persecution or detention,” he said in English to several reporters as he walked through a village littered with garbage and debris from election posters.

“Democracy is expensive and we are prepared to pay the ultimate price to live in this country in the shackles of a cabal of dictators with no respect for the rights of the people of this country.”

Originally, supporters of Mr. Odinga organized a rival swearing-in ceremony for him to protest the results, but it was blockaded, and police threatened to arrest any who attempted to participate.

In his acceptance speech, Mr. Kibaki congratulated Kenyans on the success of the democratic process and urged them to accept the verdict of the elections. “We need to heal the differences that have been created among us, between different communities, regions and religions,” the head of state said. He later stated, “My government will be committed to the task of creating and sustaining a prosperous, secure, and equitable future for all Kenyans.”

A curfew has been imposed to quell the escalating violence in the country. But with ethnic tensions rising, it seems the peace that Mr. Kibaki proclaims Kenyans must embrace is still off in the distance.