This website requires the use of Javascript to function correctly. Performance and usage will suffer if it remains disabled.
How to Enable Javascript
Study: Fish Farms Driving Wild Salmon to Extinction 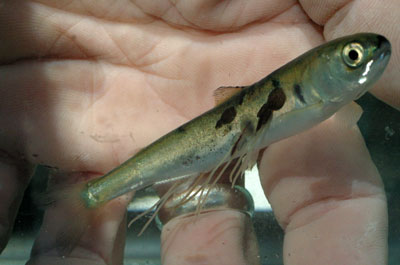 Scientists involved in a study published in the journal Science expect a 99% drop in wild salmon populations that swim past farms during migration within the next four years.

Salmon crowded in farms just off the Canadian coast create an environment in which sea lice thrive. The parasite is then transferred to wild salmon populations because of the farms’ open-net design, releasing the multiplied lice into open water.

Most at risk are young salmon as they migrate from rivers where they hatched to the ocean. Juvenile salmon are more likely to die from sea lice infestation due to their small size and thin skin.

A co-author of the study (“Declining Wild Salmon Populations in Relation to Parasites From Farm Salmon”) explained the situation: “Salmon farming breaks natural law. In the natural system, the youngest salmon are not exposed to sea lice because the adult salmon that carry the parasite are offshore. But fish farms cause a deadly collision between the vulnerable young salmon and sea lice. They are not equipped to survive this, and they don’t.”

After collecting data on adult wild salmon returns in British Columbia’s Broughton Archipelago region dating back to the 1970s, researchers compared populations that had not been exposed to salmon farms to those that were. The scientists found that wild salmon numbers in regions with many fish farms were drastically lower. Also, the study found that when farms were closed, the numbers in that region rebounded.

The argument over the negative impact of fish farms is heated. Fish farm advocates argue studies such as these rely heavily on conjecture and not hard science—claiming the reasons for the rise and fall in salmon populations are too complex to directly link rapidly declining wild populations to fish farms.

Recent years have seen a drastic increase in demand for nutrient-rich fish such as salmon, leading fish farm supporters to advocate large-scale expansion of farming. If these plans are realized, and the study’s findings are correct, ever-greater numbers of salmon will be threatened.

Wild salmon is a vital part of the ecosystem; orcas, grizzly bears, birds and even trees would all be adversely affected by a drastic drop in the number of wild salmon.

Currently, there are two main solutions for limiting fish farms’ effects on the natural environment:

However, both of these proposals are expensive, meaning increased costs for farmers and higher prices for consumers.