This website requires the use of Javascript to function correctly. Performance and usage will suffer if it remains disabled.
How to Enable Javascript
Deadly Ice Storm Strikes U.S. Midwest 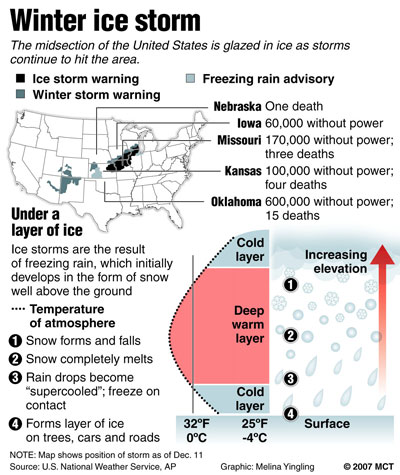 A deadly ice storm wreaked havoc across the Midwestern United States, resulting in at least 24 deaths, downing power lines, disrupting travel and driving oil prices up. Considered one of the region’s most destructive winter storms, its extreme conditions left more than 800,000 homes without power. This storm seriously disrupted the lives of residents in these areas, forcing some into shelters to obtain basic necessities.

According to meteorologists, the storm developed when an undercurrent of warm, unstable air swept through the region, causing heavy rain and sleet. Rainfall quickly became ice as temperatures continued to drop, adding frozen layers that in some cases grew to over one inch thick.

Of the two dozen people who lost their lives due to the winter storm, almost all died in traffic collisions. Alternating ice and slush during temperature changes impeded highway travel. City and suburban streets almost resembled war zones, with empty houses lining debris-strewn roads, surrounded by fallen power lines, accompanied by the continual popping sounds of ice-sheathed limbs tearing themselves from trees.

Over 800,000 residents of Oklahoma, Missouri, Kansas, Iowa and Illinois are expected to be without power for 10 days. Ice-covered power lines damaged electrical junctions in older homes, threatening to spark uncontrolled fires.

The federal government sent generators and other supplies to stock shelters in affected locations. However, most residents opted to stay home and fend for themselves, avoiding wintry gales and hazardous traveling conditions. Oklahoma City Mayor Mick Cornett stated, “We’re relying on people to look after each other” (Associated Press).

The central U.S. is the hub for crude oil storage. Since the ice storm rendered many highways impassible, transporting crude oil stores in the Midwest ground to a halt. For refineries at Cushing, Oklahoma, the ice forced plant-wide production delays. These setbacks, with other factors, caused a breakdown of petrochemical infrastructure throughout the Gulf region, leading to higher oil prices, surging to upwards of $90 (USD) per barrel.

Addressing the crisis, Oklahoma Governor Brady Henry stated, “This is without question the worst ice storm in state history and it will require a historic response from all levels of the government…We will do whatever it takes to help Oklahomans rebuild and recover from this devastating event.”