This website requires the use of Javascript to function correctly. Performance and usage will suffer if it remains disabled.
How to Enable Javascript
“Urban Guerillas” Riot in France 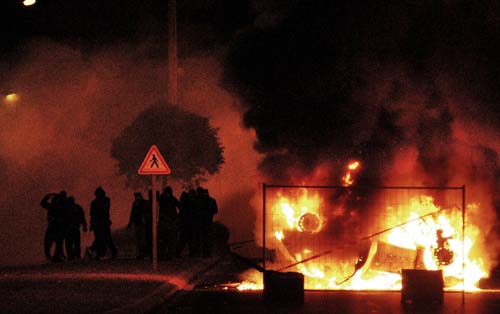 Repeated clashes between police officers and youth, which began after the death of two teenagers, in the suburban housing project Villiers-le-Bel injured over 77 officers—five seriously.

Rioters torched numerous cars and buildings, including a library and a car dealer’s showroom.

Violence spread from the northern Paris suburb to neighboring projects and towns. Using their knowledge of the complex network of streets in the Villiers-le-Bel project, the rioters lured authorities into open areas, where they attacked with baseball bats, hunting rifles and Molotov cocktails, among other homemade projectiles.

Hoping to disband the mobs and end the escalating situation, police officers countered with rubber flashballs and tear gas.

The rioters were highly organized in their attacks. One senior police union official labeled them “urban guerrillas.”

The rampages began after two teenage residents from the project were killed when their motorcycle struck a police car.

According to the official report, the teens drove through a red light without helmets on an unregistered bike. Eyewitnesses confirmed the youths were at fault.

President Nicolas Sarkozy called for “everyone to calm down and let the justice system decide who was responsible.”

The family members of the teens who died in the accident also called for the violence to end.

In 2005, three weeks of rioting began with similar events—the death of two teenagers, anger at the police and the unrest of residents (mainly ethnic immigrants) in low-income suburbs.

Mr. Sarkozy was France’s Interior Minister during the 2005 riots and took a hard line against the rioters, even calling them “scum.”

However, since becoming president, he has promised to improve conditions in the crime-laden suburbs.