This website requires the use of Javascript to function correctly. Performance and usage will suffer if it remains disabled.
How to Enable Javascript
Bee Disappearance Linked to Virus

Beekeepers from 35 states have been forced to stand back and watch as entire hives of bees rapidly diminish in both strength and number—with some reporting 30% to 90% losses. Called Colony Collapse Disorder (CCD), these losses threaten a $14.6 billion dollar industry that pollinates one-third of the United States food supply. Similar losses have been reported in Canada, a number of nations in Europe and New Zealand.

Across the United States, female worker bees have abandoned diseased hives, leaving only a few male drones and the queen. This strange phenomenon has left beekeepers, scientists in varied fields and the media baffled as to what is causing it and how to resolve it.

When CCD first began making news headlines in early spring 2007, there was a long list of possible causes, ranging from old foes of the honeybee (the parasitic varroa mite) to the absurd (radiation from cellphone towers, a theory that has been widely dismissed).

Inspecting the abdomens of infected honeybees found not just one pathogen, but nearly every disease, bacteria and virus that has infected bees over the previous century. Their immune systems were compromised. 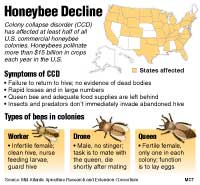 A research group put together by Columbia State University focused on an interesting piece of the puzzle. Normally when a hive is abandoned, opportunists such as the wax moth and other parasites move in to pilfer the remaining wax and honey. However, when a hive falls prey to CCD, parasites do not take residence, and beekeepers cannot induce a new bee colony to inhabit the infected hive, unless the colony is irradiated, or sterilized.

The research group concluded this meant CCD was likely caused by a virus. Researchers then turned to genetics to discover the answer. “The genome of the honeybee had just been completed,” explained Diana Cox-Foster, professor of entomology, Penn State University. “So it was possible to do the sequencing and then eliminate the genetic material of the bees.”

Scientists were able to separate the DNA of the bee from other life forms, including viruses.

The Columbia University study found that every sample hive suspected to have CCD had DNA of Israeli Acute Paralysis Virus (IAPV). No traces were found in healthy hives.

Still, most scientists, including those in the IAPV study, believe there are numerous causes building together to stress the bees’ immune systems. Contributors to the disease are believed to include pesticides, drought, repeatedly transporting hives from coast to coast, and malnutrition.

The earliest hints of CCD symptoms were reported in 2004, two years after the United States allowed honeybees to be imported from Australia.

Each affected bee is host to a slew of viruses and pathogens. Those that carried the virus IAPV were much more prone to contract CCD. IAPV is being viewed as the last stressor to cause beehives to collapse.

While IAPV does not affect bees in Australia, nearly every bee there carries the virus. The Columbia University researchers noted that “the varroa mite, for example, absent in Australia, immunosuppresses bees making them more susceptible to infection by other organisms.”

Two of four samples of royal jelly (another product of bees) imported from China tested positive for the virus.

Though not truly a “smoking gun,” IAPV is linked to CCD by mounting circumstantial evidence. However, many other causes—both manmade and biological—appear to be contributing to the collapse.