This website requires the use of Javascript to function correctly. Performance and usage will suffer if it remains disabled.
How to Enable Javascript
U.S. Southeast Drought Grows Worse 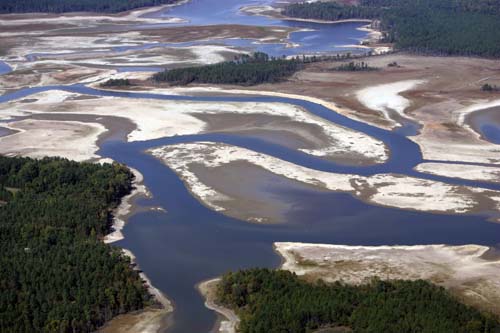 MCT
Water continues to dwindle, as shown in this aerial photo taken, October 15, 2007, over Falls Lake in Raleigh, North Carolina.

Severe drought has tightened its grip on regions in the Southeast ranging from North Carolina to Georgia. Recent population explosions, which have heavily taxed area water supplies, are bearing much of the blame. Reservoirs and lakes supplying freshwater in the South are expected to have an average of only 80-121 days of water left.

The drought has been so severe that it is making an impact on local businesses. With regulators imposing new water restrictions, even serving a complimentary glass of water at restaurants has been eliminated. Instead, restaurants and other eateries have been forced to sell bottled water to cover the heightened cost of water usage.

Some business owners theorize that the drought will soon lift, considering the Southeast’s typical reoccurring pattern of heavy rainfall. While over 50 trillion gallons usually drench Georgia, only 1.2 trillion gallons are used statewide to support its population. Because of this factor, some have called for the construction of new reservoir systems. However, neither construction nor rainfall has yet happened.

Naturally, the drought has panicked residents, who are angered at the government’s lack of foresight in planning for this situation. As the population grew, correct measures were not taken to ensure water supplies could support the increase. Residents who now live under a water ban are no longer permitted to use water for recreational uses, such as watering lawns and washing cars.

Lake Sidney Lanier, the reservoir for Atlanta, Georgia, has been overtaxed for years and is expected to be depleted within the next few months.

Many were expecting this year’s hurricane season to replenish water levels. The drought has been surprising for an area that is usually preoccupied with hurricane preparations. Every water measurement record in Georgia’s history has been broken, with conditions such as inches of rain, soil moisture and stream flow rate at all-time lows.

C.H. Guernsey, an Atlanta-based consultant who has been working on this situation with an engineering firm, remarked, “We’re in a very stressful situation now…but come next spring, if we don’t have substantial rainfall this winter, these reservoirs are not going to refill” (The New York Times).