This website requires the use of Javascript to function correctly. Performance and usage will suffer if it remains disabled.
How to Enable Javascript
Armed Conflict Costs Africa $18 Billion Each Year 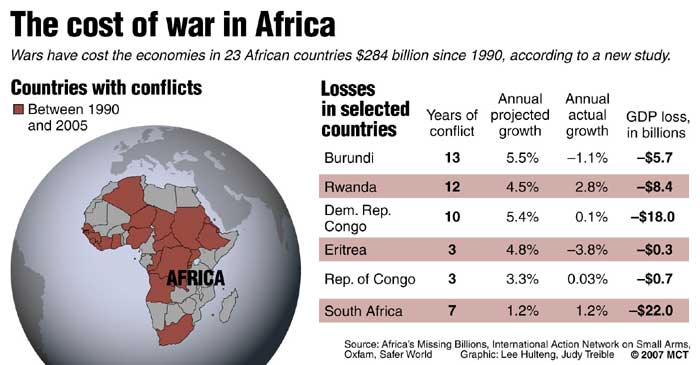 During the past 15 years, almost $300 billion has been squandered on armed conflict in Africa, capital that could have been used to lift the continent out of extreme poverty and to prevent continued disease epidemics, a new study revealed.

The estimated $18 billion per year “is a massive waste of resources—roughly equivalent to total international aid to Africa from major donors during the same period. It is also roughly equivalent to the additional funds estimated to be necessary to address the problems of HIV and AIDS in Africa, or to address Africa’s needs in education, clean water and sanitation,” the report stated.

In effect, 38% of the world’s armed confrontations take place on African soil.

In addition, the report highlighted that “the average annual loss of 15 percent of GDP (Gross Domestic Product) represents an enormous economic burden—this is one and a half times average African spending on health and education combined.”

“This is money Africa can ill afford to lose,” Liberia’s President Ellen Johnson-Sirleaf stated in the introduction of the report.

“The sums are appalling; the price that Africa is paying could cover the cost of solving the HIV and AIDS crisis in Africa, or provide education, water and prevention and treatment for TB and malaria. Literally thousands of hospitals, schools, and roads could have been built, positively affecting millions of people. Not only do the people of Africa suffer the physical horrors of violence, armed conflict undermines their efforts to escape poverty.”

President Johnson-Sirleaf understands the huge loss it represents for the continent, including her own country. Since 1991, Liberia has been one of the African nations that has been the target of armed combat and widespread civil strife. Although conditions for peace in the country were established in 2003 after President Charles Taylor left office, Liberia continues to experience political and economic perils, including the challenge of accommodating thousands of Liberian refugees who have returned to their homeland since the war ended.

However, it is not only robbed human lives and financial resources stolen in conflict that continue to cause the most damage to the continent, but the intangible daily mental and physical effects felt by the people themselves—and in some cases, other nations around them not directly involved in the conflict itself.

In the report, experts conclude that the majority of the problem lies in poor regulation of arms movement across borders—approximately “95 per cent of Africa’s most commonly used conflict weapons come from outside the continent.” These include the Kalashnikov assault rifle, more commonly known as the AK-47.

Also of primary concern is the tendency for regionalized conflicts to be magnified into international ones. According to the report, the situation in Darfur has already “drawn in neighboring Chad and the Central African Republic,” and other clashes in the area have caused similar situations.

Additionally, the economies of countries in armed skirmishes become intertwined.

“In 2002, when fighting in Cote d’Ivoire made access to the key Ivorian seaport of Abidjan virtually impossible, foreign trade was disrupted in Mali, Burkina Faso and Niger,” the report stated.

And in Somaliland and Mozambique, “informal economies that provided a basic means of survival in wartime have been partly responsible for the collapse of formal rural market networks and have been an obstacle to post-conflict resolution,” the report said.