This website requires the use of Javascript to function correctly. Performance and usage will suffer if it remains disabled.
How to Enable Javascript
U.S. Housing Market Riddled With Uncertainty 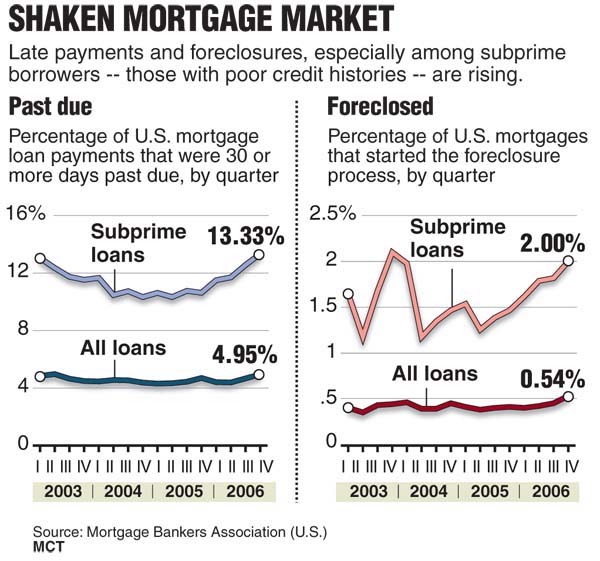 The U.S. Commerce Department reported that construction of new homes and apartments dropped 6.1% in July 2007, down 21% from July 2006, to the slowest pace since January 1997. This cooling of the market does not appear to be a short-term trend.

In July, the number of applications—perhaps the best indicator of future construction activity—fell by almost 3% nationally. Ironically, two of the regions hit particularly hard by these declines have been symbols of recent economic growth: the American South and West, with construction slumping 11% and 3.7%, respectively.

What have been the consequences of this recent slowdown? Builders across the nation have begun to slash building prices, offering aggressive buying incentives in an effort to induce sales of recently built homes and to stimulate the “pre-sale” of new homes.

Despite these efforts to maintain growth, or at least the status quo, the ripple effect created by lack of sales has been noticeable. The Labor Department reports increases in those filing for unemployment at six times the rate of analysts’ expectations.

New construction is not the only area that has fizzled. The National Association of Realtors reported that sales of existing homes from April to June 2007 declined in 41 of 50 states and one-third of the country’s major metropolitan areas experienced price declines in the housing market (Associated Press).

Although there are numerous factors contributing to the housing slump, consistent low interest rates for almost a decade have played a significant role in the current crisis. Since the late 1990s, rates have stayed at unprecedented lows, pushing the housing market and lending industry to dizzying new heights.

This allowed millions of homeowners to upgrade into “dream homes” at the edge of their financial capabilities. Although this trend created a windfall in the lending industry, it also caused tremendous competition among banks as they maneuvered for new customers and encouraged homeowners to live on credit—regardless of whether they needed bigger, more expensive homes. Buyers were routinely approved for high-risk loans, second and sometimes even third and fourth mortgages in the secondary market, largely due to the overwhelming success of the industry as a whole. Encouraged by the housing and lending industries, Americans have built and bought new houses and drained their home equity at unprecedented levels.

A perfect example of the degree of this mounting crisis is the present situation for Arizona’s largest bank, JPMorgan Chase. The bank’s proportion of mortgage delinquencies to all loans surged to 1.19% in the second quarter from a minuscule 0.08% one year earlier—a delinquency rate of 15 times that of the same period just 12 months ago (The Arizona Republic).

This troubling development has driven scores of smaller lending institutions into bankruptcy and has resulted in industry giant Countrywide Financial, the nation’s largest mortgage lender, borrowing $11.5 billion dollars from a group of 40 banks to remain financially viable. The depths of the growing crisis have led to Wall Street investors and International bankers keeping an increasingly watchful eye on the troubled housing and lending industries.

National Australia Bank CEO John Stewart reported that over the next 12 to 18 months, as short term adjustable rate mortgages (ARMs) expire or reset for millions of borrowers, the $250 billion of debt given to “subprime” U.S. borrowers with bad credit profiles will be at risk. Millions of borrowers will be forced into default, extending the credit crisis even further (Business Day).

A lack of international confidence was manifested when Asian and European markets fell sharply upon the recent news.

What are the implications and what does the future hold? Opinions vary. “Looking over periods of stress that I’ve seen, this is the strongest global economy we’ve had,” said U.S. Treasury Secretary Henry Paulson in a Wall Street Journal interview.

However, a perception of a strong global economy does not necessarily translate into universal international confidence in the United States. The faltering U.S. mortgage industry and realization that many millions of Americans are living “close to the edge” financially could be the first visible cracks in a dangerously weakened economy.