This website requires the use of Javascript to function correctly. Performance and usage will suffer if it remains disabled.
How to Enable Javascript
Thousands Flee as Fires Rage Across Greece 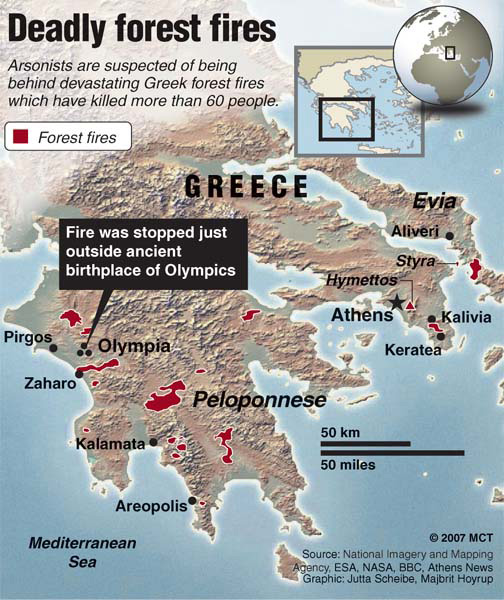 Massive fires have raged across Greece, killing dozens of people and destroying thousands of acres of countryside. The flames have forced hundreds to evacuate and have left thousands homeless.

The mountainous Peloponnese region in southern Greece and the island of Evia, north of Athens, have suffered the most damage. Billowing smoke blackened the sky of the country’s capital as fire threatened historic landmarks, including the birthplace of the Olympics.

In addition, at least two fires burned out of control on the border with Albania.

Several of the victims included a mother and her children who were overcome by the raging fire while trying to evacuate one of the threatened areas by car.

Not only have the scorching fires damaged structures, they have also killed thousands of livestock and destroyed the olive and orange crop that sustains Greece economically. Authorities worry that piles of charred animal carcasses could lead to disease epidemics.

In addition to paralyzing the nation physically, the fires have aroused anger in many residents, who say the government’s response to the crisis has been inadequate, and hold officials responsible for the inability to contain the fires and loss of life.

Authorities estimate the fires have caused over five billion Euros in damage and the government has declared a state of emergency. To combat the fires, 19 countries have sent help to Greece in the form of helicopters, manpower and machinery.

Several investigations are underway to determine the exact cause of the fires. Authorities are uncertain whether they are all a result of arson or natural causes, but one man suspected of setting a blaze that killed six people has been charged with homicide.

Summer forest fires are common in Greece, but this year they have been more prevalent. A combination of abnormally hot temperatures and drought, including low rainfall levels, has made the country prime breeding ground for wildfires.

Greece is not the only Mediterranean country that has fought out-of-control blazes this summer; Italy and Spain have also been plagued by them.

On Spain’s Grand Canary islands off the coast of Northern Africa, 11,000 people evacuated when fire overtook several villages there. In Italy, several people lost their lives as fires spread through the nation’s countryside. And in Bulgaria, forest fires were responsible for the deaths of two citizens. Authorities there say the unusually dry weather is responsible for more than 1,000 wildfires across the nation, burning more than 84,000 acres of forests and farmland.

With a heat wave predicted to occur in the coming week, authorities are concerned about how they will control the blazes.