This website requires the use of Javascript to function correctly. Performance and usage will suffer if it remains disabled.
How to Enable Javascript
Midwest Drenched by Weeks of Rain and Floods

Midwest Drenched by Weeks of Rain and Floods

Some of the areas hit include: 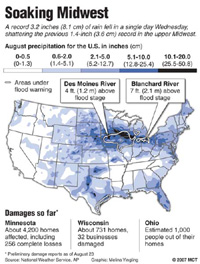 • Wisconsin: 10 to 12 inches in one weekend flooded the southern part of the state, destroying more than 1,500 homes and causing $48 million in damages.

• Minnesota: Up to 15 inches of rain fell in 24 hours, causing the Whitewater River to overflow, washing away sections of State Road 74, and causing $67 million in damages.

• Ohio: Northwestern and north central parts of the state were worst hit, with Findlay perhaps sustaining the worst flooding of all the Midwest. Thousands were forced to evacuate in what was categorized as a “once in a 100 years” flood.

• Illinois: Chicago’s Department of Streets and Sanitation detailed the extent of destruction to the area: There were 5,749 reports of trees and limbs being down; 345 traffic signals out; 193 light poles damaged; and 332 wires down.

Other states inundated by the constant thunderstorms and rainfall include Iowa and Michigan.

President George W. Bush made a disaster declaration for Wisconsin, Minnesota and Ohio, meaning the damage was severe enough to warrant federal aid for cleanup and rebuilding. Total monetary damages are expected to be in the millions.

As the floodwaters recede, citizens who were forced to leave are returning home to find warped wood floors and belongings strewn across lawns, covered in mud or completely swept away and lost altogether. Some houses and other buildings were laid waste by lightning fires or ripped apart by rapid currents.

The amount of rainfall and extended reach of the Midwest floods, as well as the earlier flooding of Texas and Oklahoma, has led some to call 2007 “the summer of the floods.”