This website requires the use of Javascript to function correctly. Performance and usage will suffer if it remains disabled.
How to Enable Javascript
World’s Largest UN Peacekeeping Force Headed for Darfur 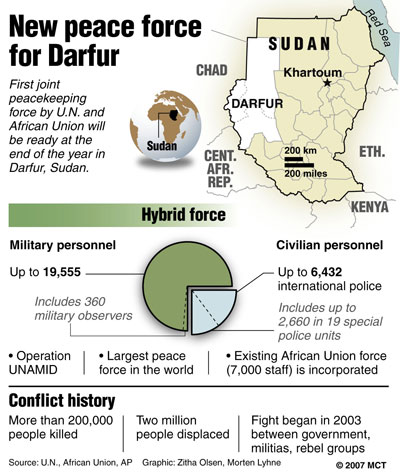 The United Nations is creating the largest peacekeeping force in the world to suppress the ongoing violence in the Darfur region of Sudan.

Termed UNAMID (United Nations-African Union Mission in Darfur), the hybrid operation will maintain a headquarters base in El Fasher in West Darfur by the beginning of October. The combined unit will consist of up to 19,555 military personnel (including 360 military observers and liaison officers), and 3,772 police personnel (including 19 formed police units with up to 140 personnel each). The new force will combine with the 7,000-strong African Union force already in place to bring a greater military presence to the area.

Officials estimate that while the program will cost more than $2 billion USD during its first year, the force will help suppress the rape, looting, murder and government bombardment that has forced millions to evacuate their homes. The violence in Darfur has killed more than 200,000 people and displaced two million since 2003 (Reuters).

In addition, the resolution…

Britain and France are reportedly the strongest supporters of the resolution in Sudan, the largest country in Africa, which according to the UN report “continues to constitute a threat to international peace and security.”