This website requires the use of Javascript to function correctly. Performance and usage will suffer if it remains disabled.
How to Enable Javascript
Downsizing U.S. Troops in Germany 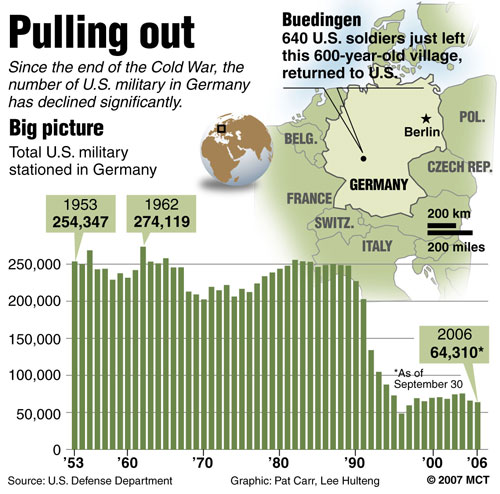 The United States continues to downsize its military presence in Europe as it implements Pentagon plans to relinquish U.S. bases in Germany.

The U.S. Department of Defense announced in a July 11 news release that military facilities in Buedingen (a medieval village where U.S. troops have been stationed since 1945) and Geinhausen will be returned to Germany in 2008. Facilities in Darmstadt and Hanau will be relinquished either late 2008 or early 2009. Also, the Turley Barracks, a small post in Mannheim, will close within this year.

This latest round of closures—part of an overall plan to realign American military forces overseas—affects nearly 2,000 U.S. soldiers, 800 U.S. civilians and 700 locally-hired workers.

This comes at a time when two-thirds of the German public holds an unfavorable view of the United States.

The Associated Press reported, “Many of the changes…are simply a continuation of post-Cold War cutbacks that began in the 1990s.

“But deeper changes are on the way as the U.S. looks less to large, fixed bases like those it has had for decades in Germany, to smaller installations where troops could be moved quickly for training or to deal with a crisis.”