This website requires the use of Javascript to function correctly. Performance and usage will suffer if it remains disabled.
How to Enable Javascript
UK Battles Foot-and-Mouth Disease (Again) 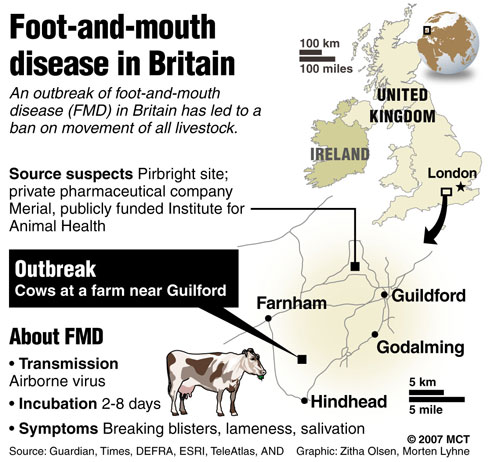 For the first time since 2001, an outbreak of foot-and-mouth disease (FMD) has struck Britain, this time on a farm in Pirbright, a village in Surrey, England, southwest of London.

The United Kingdom’s Department for Environment, Food and Rural Affairs confirmed on August 3 the discovery of a strain of FMD in cattle at Pirbright Laboratory, a government research facility that investigates infectious diseases of farm animals. The facility is shared by Merial Animal Health, a private pharmaceutical company that researches and manufactures animal vaccines, and by the Institute for Animal Health (IAH), which describes itself as “an international research centre working to improve the health of farm animals worldwide.”

The strain, not normally found in animals, has been linked to a July 16 vaccine batch manufactured by Merial.

A ban on movement of all livestock in Britain has been set in place, to last a minimum of 21 days.

Both Merial and IAH insist that biosecurity measures were not breached.

A 2002 government-funded report by Biotechnology and Biological Sciences Research Council stated that some labs and areas at Pirbright did not meet the standards expected of a modern biomedical facility. In 2001, a former government microbiologist twice wrote to then-Prime Minister Tony Blair expressing concern over the use of “live” viruses to make vaccines for FMD, and recommended using only the “dead” form.

Britain experienced an FMD outbreak on farms in 2001, which involved 2,000-plus cases. Approximately seven million sheep and cattle were destroyed to stop its spread, costing Britain 8 billion pounds ($16 billion USD).