This website requires the use of Javascript to function correctly. Performance and usage will suffer if it remains disabled.
How to Enable Javascript
African Continent Handcuffed by Power Shortages 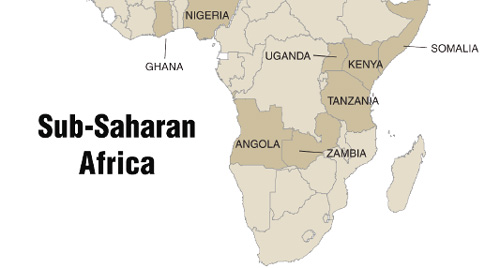 Twenty-five of the 44 sub-Saharan African nations are facing a mounting crisis from unprecedented power blackouts (load-shedding) that are blanketing the continent. Alarmingly, many experts agree there is no solution on the horizon due to a cacophony of complex issues and interrelated problems (International Herald Tribune).

However, blackouts are not the only issue. In certain countries such as Zambia, severe electricity shortages have resulted in only 20% of households having access to power and only 3% in rural areas having limited access to the power grid.

In countries such as Angola and Nigeria, it is the norm for almost all businesses and individuals desiring reliable power to operate individual gas-run generators. As imagined, this is not only burdensome to many with inordinately high gas costs, but is also contributing to an ever-growing pollution problem and environmental nightmare in the densely populated urban centers across Africa.

However, in nations where customers do have access to power, significant obstacles still exist. Perhaps the most critical problem is an unreliable power supply due to crumbling infrastructure, which is largely based on lack of routine maintenance and virtually no implementation or integration of the new technology for the massive interconnected power grids between African nations.

Lawrence Musaba, the manager of the Southern Africa Power Pool, a 12-nation electricity consortium on the continent’s tip, characterized the state of Africa’s power grid with a sobering report: “We’ve had no significant capital injection into generation and transmission, from either the private or public sectors, for 15, maybe 20 years,” he said (ibid.).

Nigeria is a clear example of the effects of badly deteriorating infrastructure and dilapidated or ill-maintained equipment. The Council for Renewable Energy in Nigeria reported that of its 79 existing power plants only 19 are currently operational and generating power. The results have been devastating for Africa’s most populous nation, as electricity production plummeted by over 60% in this nation of over 140 million people (ibid.).

However, lack of investment to improve aging equipment and infrastructure is not the only contributing factor to faltering power and rolling blackouts. War in the Congo has delayed and disrupted the country’s plans to use its rivers and their massive potential for hydroelectric power, and armed conflict has destroyed much of the existing power grid. Kenya, Tanzania, Uganda and Ghana have significant hydroelectric capabilities, but severe drought has persistently limited certain rivers’ water flow, subsequently crippling facilities ability to generate large quantities of reliable power for their citizens.

A pivotal time period contributing to current conditions was the decision made by many nations in the early 1990s to privatize portions of their national power industries in the name of providing a free market and healthy competition. In many cases, the results have been disastrous. For instance, circumstances in Mozambique typify the frustration of both customers and power suppliers across the continent. Here, power supply and distribution is controlled by multiple private companies that lack strict regulations and oversight. Because of this, grids are so poorly managed that power companies are paid for as little as 60% of the power they produce with the rest either being stolen by those who are almost never caught or simply lost due to poorly maintained grids.

As a result, on July 15, 2007, the World Bank’s Board of Directors approved a $45 million dollar loan from the International Development Association to fund the construction of new transmission lines between Mozambique and Malawi. Although this investment shows recognition of the crisis by assisting in developing the regional electricity grid, only time will tell if this accomplishes anything tangible.

It would seem that government control and regulation may be the solution. In the case of South Africa, the government has nationalized power through the world’s fourth-largest power utility ESKOM, over which it maintains strict control. Sadly, even the power problems are becoming dire for different reasons than its less economically strong neighbors. Although warned by experts for over a decade to invest in new, renewable resources and build more power plants, ESKOM has refused.

The result has been massive rolling blackouts and shortages of power across a country that once had the only truly reliable power grid in Sub-Saharan Africa. Although ESKOM announced plans in July 2007 to expand new energy sources such as nuclear, wind, solar and hydroelectric power, they acknowledge these investments will not have a significant impact until 2025 (Business Day Johannesburg).

This has caused a ripple effect across the continent. In recent years, South Africa’s reliable and extensive chain of power plants has not only provided more than enough power for its citizens, but was a power “safety net” for its less developed and power-deficient African neighbors to the north.

However, persistent power failures in recent months have experts ominously predicting that the country could itself experience at least seven years of worsening rolling blackouts, interrupted power and electricity shortages. It is clear that South Africa no longer has the ability to support its neighbors.

The issues affecting the continent of Africa are complex, cross international borders and affect the daily lives of hundreds of millions who are seeking a better life and the ability to participate in growing economies.

The current power shortage is just one of many issues that does not appear to have an easy solution.