This website requires the use of Javascript to function correctly. Performance and usage will suffer if it remains disabled.
How to Enable Javascript
California: Moths May Devour Millions 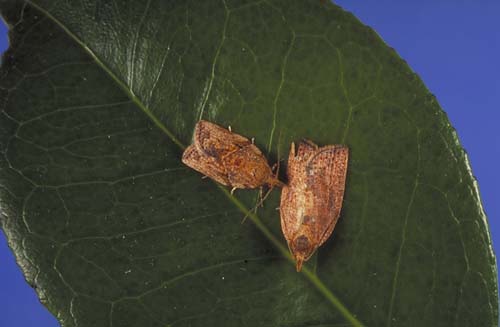 The Bay Area in California is battling an invasion of the Australian Light Brown Apple Moth. If the insect takes a firm hold in the state, it may cause an estimated $100 million in damages.

From its plain appearance one would not think that, when in the caterpillar stage, the moths feed on nearly every fruit, flower and leafy plant in its path. Its voracious appetite has caused some to dub it the “everything moth” (referring to its diet).

Government programs are being implemented, at both state and county levels, in an attempt to address the problems caused by the moth. Massive efforts to spray both crops and neighborhoods are underway and quarantine zones have been set up to limit the moths from being transported from one area to another.

But the moths could exist at small, undetected levels for years before their population booms—making eradication difficult.

Since it was first observed in February of this year, 3,600 moths have found.

Also at risk are Napa Valley’s vineyards, which are a large part of the state’s $38 billion agricultural industry.

Because California has a different mix of natural predators than Australia, the Light Brown Apple Moth may thrive in the state. If even a small number make it through this early effort to exterminate them, they could make the state a permanent home—joining other imported pests such as the Mediterranean fruit fly, the glassy-winged sharpshooter and the Red Imported Fire Ant.