This website requires the use of Javascript to function correctly. Performance and usage will suffer if it remains disabled.
How to Enable Javascript
Thousands of Somalis Flee Constant Bloodshed 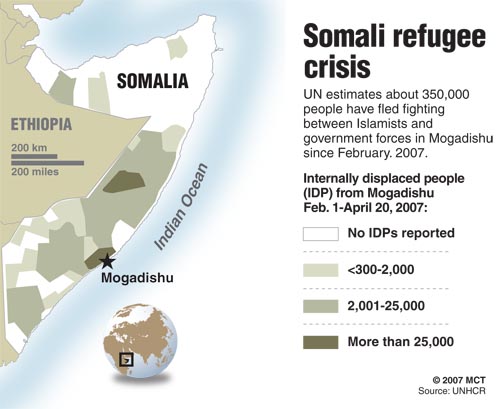 A nine-day offensive by the Ethiopian-Somali army against rebels has brought over 300 casualties and left Mogadishu, Somalia’s capital city, desolate. The rebels consist mostly of Islamists who oppose the presence of the American-backed Ethiopian army.

Mogadishu has been overwhelmed with repeated gunfights, suicide bombings and regular shelling, causing civilians caught in the fighting to flee for their lives. In the streets lie rotting corpses; houses in ruins; with gunshots and explosions heard regularly. In March alone, over 1,000 people died—mostly civilians.

However, Prime Minister Ali Mohamed Gedi recently declared, “Most of the fighting in Mogadishu is now over.” He also said that the capital should hopefully be secured soon, with only a few “pockets of resistance” needing to be cleared.

Since February, an estimated 350,000 Somalis have fled the city in an attempt to escape the violence. But neighboring cities have quickly become overcrowded with the displaced citizens. Some are forced to live under trees or out in the open. Despite fleeing the violence in the capital, the refugees face new problems of starvation and disease.

Unable to help the refugees, the already taxed Somali government has begun to call for outside aid from the United Nations and Western nations. However, the UN and other aid groups have been unable to deliver food and medical supplies—due to lack of cooperation from the government and the fighting itself.

The United States has long tried to help bring peace to Somalia—backing the interim government as well as Ethiopian forces, who were brought in to help overthrow the Islamist-controlled government in late 2006. The UN, the African Union and other Western nations have also brought aid to the country and mounted many attempts to broker peace.

Nonetheless, Somalia is a maze of competing interests throughout all levels of society. High-ranking government officials struggle for dominance. Some want outside aid, others do not. Also, warlords, who have learned to make a living from anarchy, oppose any peace effort.

Yet all attempts to bring peace and aid to the country have failed, worsening the bloodshed and overall quality of life there. Even with the successful defeat of the Islamist rebels and the citizens beginning to return, the government will have a new problem on their hands—rebuilding a desolate city, thwarting a humanitarian crisis and attending to the multitude of problems that always follow in war’s wake.