This website requires the use of Javascript to function correctly. Performance and usage will suffer if it remains disabled.
How to Enable Javascript
Supreme Court Rules on Abortion—and Activists React 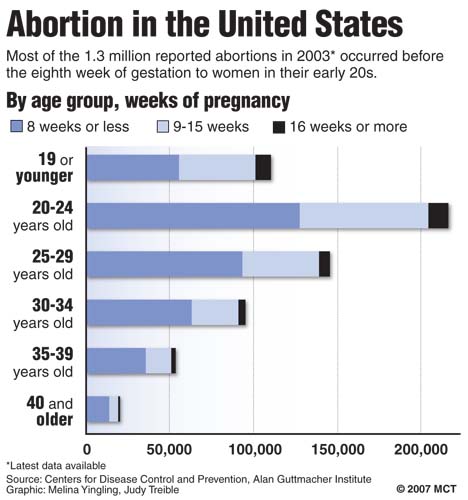 The U.S. Supreme Court voted 5-4 in favor of backing the Partial Birth Abortion Ban Act, which Congress signed into law in 2003, saying the ban does not affect a woman’s right to choose abortion.

The decision came to the Supreme Court after the state courts of California, Nebraska and New York, as well as three appeals courts, ruled the ban unconstitutional.

The ruling highlights the effect of President George W. Bush appointing both Chief Justice John Roberts and Justice Samuel Alito, generally tipping the Court in favor of conservatives—especially considering the Supreme Court voted against a similar ban in 2000.

The controversial late-term abortion procedure, technically named intact dilation and extraction (or intact D&E), continues to be a hot-button topic for activists on both sides of the issue.

Abortion advocates feel the decision will severely limit women’s rights and their health, and will also set a precedent for similar rulings in the future. Shortly after the decision was made, one group stated on its website that a “majority of the U.S. Supreme Court showed…it does not care about the health, well-being, and safety of American women.”

Others who are pro-abortion feel the wording of the ban is too broad, and fear it may be applied to all late-term abortions.

On the other side, another group, claiming this as a small victory, said on its website that “finally medical common sense and human reason has prevailed,” and then asked, “Is Roe v. Wade next?”

But not all abortion opponents were completely elated with the ban being upheld. Some who oppose abortion feel the ban will not decrease the number of abortions because it does not address other late-term procedures, leaving a few options open. One procedure—which involves dismembering the fetus—remains legal.

The emotional reactions and heated debate over the ban prove how hostile the two camps are against one another.

But, despite the Supreme Court’s decision, only a few abortions may be prevented. Estimates on how many intact D&E abortions are performed per year range from 2,000 to 5,000. Surprisingly, even using the highest estimates, with 1.3 million abortions taking place annually in America, only 0.4% (approximately 5,000) are prohibited by the ban!

Rather than decreasing abortions, this ruling will more likely have an intense political effect, spurring activists to campaign harder for their respective causes. This Supreme Court decision is already being spun by presidential hopefuls, and could become one of the key factors in the upcoming election—further dividing an already divided government.