This website requires the use of Javascript to function correctly. Performance and usage will suffer if it remains disabled.
How to Enable Javascript
Binge Eating Surpasses Anorexia and Bulimia

While most are familiar with the danger of binge drinking, a new survey shows that 3.5% of women and 2% of men in the U.S. struggle with the lesser known problem of binge eating. Some see this as the emergence of a major public-health problem.

Binge eaters consume abnormally large amounts of food. Unable to control their urges, they literally eat until they are in pain. Feelings of embarrassment, disgust, guilt and hopelessness become the end result.

While not an officially diagnosed disorder, binge eating is more widespread than anorexia or bulimia. Those who struggle with this problem often battle depression.

Why such appetites? One food addict stated she used food “as a crutch.” Others see it as a form of temporary escape.

The treatments for binge eating are psychological, or involve medication or even surgery. But are these the best remedies, or do they merely address the effects, without looking for the cause—and how can it be addressed?

Those caught in this destructive cycle are controlled by their emotions. David C. Pack addresses the subject of emotions in the article “Are You Emotionally Mature?”:

“Part of modern social conditioning involves people having been virtually trained to look for and almost exclusively respond to their feelings. They have even been taught to elevate their feelings to the point of almost continually asking themselves how they feel—about almost everything!

“This represents an enormous change in the overall way that most people think and react today—and how they view the circumstances in which they find themselves.

“Here is what is different—what has changed. The vast majority of people, including society as a whole, once generally reacted to circumstances, and the environment around them, based on the values that they had been taught—based on ethics, principles, morals, beliefs, integrity and overall character. This meant that people once viewed matters based much more on right versus wrong, good versus evil, proper versus improper, wise versus unwise, and even law versus sin.”

To learn more of the basic yet important subject of human emotions, take time to read the entire article. 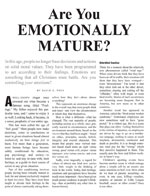 Are You Emotionally Mature?