This website requires the use of Javascript to function correctly. Performance and usage will suffer if it remains disabled.
How to Enable Javascript
Bird Flu Outbreak in Britain 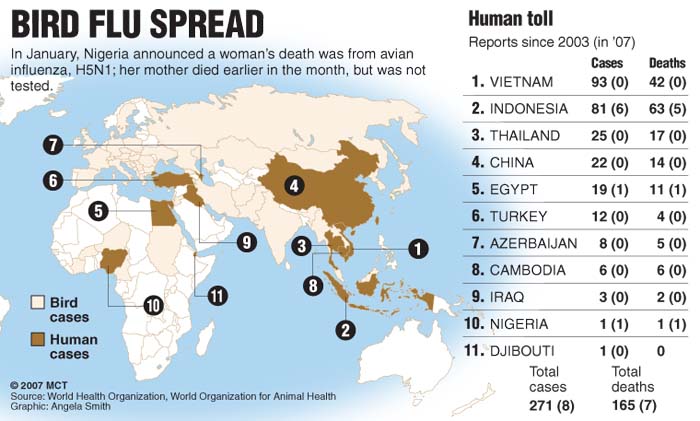 The worldwide bird flu threat has remained somewhat quiet so far this winter in the Northern Hemisphere, with the few human fatalities being reported in Asia and Africa.

Last week, however, an outbreak at a farm in Britain once again raised concerns. More than 150,000 turkeys from a farm near the town of Lowestoft were culled over the weekend in an attempt to control the spread of the virus.

British authorities confirmed that it was the same Asian strain of the deadly H5N1 virus that appeared in Hungary last month, prompting the culling of thousands of geese. This strain has killed or forced the slaughter of 200 million birds since 2003. It has also infected 271 people and caused 165 deaths, the latest being a woman in Nigeria (the first known death in sub-Saharan Africa). This recent event is the first case of H5N1 to be found on a UK commercial farm.

Dr. David Nabarro, the UN bird flu envoy, said, “We have been expecting that there may well be human cases in Nigeria because the amount of virus circulating in the poultry population is really very large.”

Dr. Robert Webster, a flu expert with St. Jude Children’s Research Hospital in Memphis, Tennessee, said the virus is continually adapting and evolving. At a news conference on Thursday in Alexandria, Virginia (before news of the British outbreak), Dr. Webster stated, “This is the greatest concern of mine at the moment, the resurgence of these viruses in Japan, South Korea and Thailand, where they had aggressively stamped out the virus, and the virus has come back in.”

Avian flu expert Colin Butter of the Institute of Animal Health said the British outbreak was somewhat surprising, as it had happened outside the main bird migration period: “We would not expect this to happen in the middle of winter. If it was going to happen we would expect it to happen in spring. The next thing we need to know is if this is a primary or secondary case. If this is a secondary case, it is much more serious. If this is the first case, or ‘reference case,’ and we can stamp it out, the outbreak will be controlled.”

Outbreaks can have significant economic impact, with two cases in recent years costing the British poultry industry 58 million Pounds ($115 million USD). In total, poultry production is a 3.4 billion Pound-per-year industry ($6.7 billion USD), with 800 million birds produced annually. In this case, six countries, including Russia and Japan, have already placed a ban on all poultry imports from the UK.

More critically, scientists are concerned that the virus will eventually become easily transmissible between humans, potentially causing a catastrophic global pandemic. The growing prevalence of the virus among bird populations makes this more likely to occur.

Bible prophecy also foretells that pestilences will increase in the last days—the time we are in now! For more details, read our in-depth analysis of the avian flu virus.

Avian Flu Pandemic – Is It Only a Matter of Time?
As winter approaches for much of the northern hemisphere, is an avian flu pandemic guaranteed to occur?