This website requires the use of Javascript to function correctly. Performance and usage will suffer if it remains disabled.
How to Enable Javascript
The State of the Union Address – What the Media Missed

The State of the Union Address

What the Media Missed 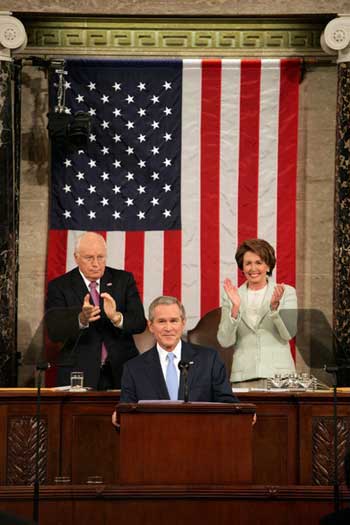 Republicans and Democrats gathered for U.S. President George W. Bush’s seventh annual State of the Union address, the first time Mr. Bush has addressed a democratic majority in the Congress and a female Speaker of the House.

The President addressed energy, immigration, health care, education, the war on terror and his strategy for Iraq.

• In his energy plan, Mr. Bush stressed the need for better fuel economy and proposed cutting America’s gasoline consumption by 20% in the next ten years. The plan also included increasing domestic oil production and doubling the capacity of the nation’s oil reserves.

• The President called upon Congress to re-authorize his “No Child Left Behind” bill for the nation’s schools.

Yet the majority of the public’s interest revolved around the president’s new policies in Iraq. He asked Congress to increase the active Army and Marine Corps by 92,000 soldiers and marines in the next five years. Mr. Bush also called for congressional lawmakers to stand behind him in supporting his new Iraq strategy, which includes sending more troops.

As expected, news commentators discussed the “bread and butter” issues of the president’s policy proposals; key elements of his speech were overlooked.

The president’s speech comes at a time of unprecedented division between and within branches of federal, state and local government. Early in his speech, Mr. Bush admitted, “We’re not the first to come here with a government divided and uncertainty in the air.”

In the official democratic response to the State of the Union address, Virginian Senator Jim Webb stated, “We look forward to working with the president and his party to bring about these changes.” However, he went on to criticize the administration’s war strategy, calling for a new direction in Iraq: “Tonight we are calling on this president to take…action…If he does, we will join him. If he does not, we will be showing him the way.”

According to recent polls, 86% of Americans think life is good overall in the nation. But 63% believe the country is on the wrong track morally and ethically, and only 4 in 10 believe the U.S. is better off with the Democrats controlling the House and Senate. One survey discovered that the public’s interest in the Iraq war remains high, with another two-thirds—65%—disapproving of how the current administration is handling it. In other words, no one expects things to get better (at least not anytime soon).

As the number of U.S. military deaths in Iraq continues to increase, most view the war as nearly unsolvable. Can America find a viable solution?

A Future of Hope and Opportunity?

President Bush said that, despite political parties, those in government offices are all held to the same standards: “To extend this nation’s prosperity; to spend the people’s money wisely.”

Mr. Bush also stated it is the government’s duty to “solve problems, not leave them to future generations,” and added that it was their job to “guard against all evil.”

However, many evils already exist within America’s borders—in the form of widespread crime, immorality and corruption. Consider. Before Hurricane Katrina, New Orleans was a study in murder, drugs and mayhem; today “the city that care forgot” is being held hostage to ever greater violence than before—causing 3,000 people to march on City Hall to demand that city leaders make New Orleans safer. Meanwhile, movies making the rounds at the Sundance Film Festival offer “entertainment” such as scenes of a 12-year-old girl being raped and a documentary about bestiality—all in the name of “art.” Elsewhere, civic and religious leaders—who in years past were held up as honorable examples—are being brought down in scandals involving sex, money and power.

The president also said it was the government’s duty to “make life better for our fellow Americans, and to help them to build a future of hope and opportunity—and this is the business before us tonight.”

But as terrorists become emboldened—as moral boundaries are erased—as competing governments such as the European Union and China position themselves for superpower status—as calls for America’s demise grow louder—does a “future of hope and opportunity” still exist?

A Government of Peace

Near the end of his speech, Mr. Bush stated, “The people of Iraq want to live in peace, and now it’s time for their government to act.”

Ultimately, no government, no matter how well-intentioned, is capable of bringing lasting peace; at least not by the hands of men.

Consider the following excerpt from the booklet Why Mankind Cannot Solve Its Problems, written by David C. Pack:

“Nothing can be understood or accomplished without proper knowledge. Even something as simple as changing a tire requires ‘know how.’ Without right knowledge, mankind stands completely powerless—absolutely helpless—before its problems. Because man has rejected the source of right knowledge, he is surrounded by terrible troubles.

“Consider just one world problem that has defied all humanly-devised solutions throughout recorded history: finding peace. Man has literally barred himself from the knowledge that would make this possible. Just look at the daily newspaper headlines. War seems to literally grip the planet in every part of the world.”

“This is because the governments of men simply do not work. They have never succeeded in finding permanent solutions to civilization’s problems. They lack the essential knowledge necessary to solve them. They do not have the answers to mankind’s most important questions. Man does not, of himself, understand the path to peace—or, for that matter, the path to abundance, happiness, health and prosperity. We will soon learn why. The greatest thinkers, leaders, educators and scientists have failed miserably in their quest for peace on earth. God has not yet revealed to mankind, as a whole, how to achieve the solution to war.

“Is it any wonder God inspired the prophet Hosea to record, ‘My people are destroyed for lack of knowledge: because you have rejected knowledge, I will also reject you’ (4:6)? Mankind could have known, understood and had access to far more important, vital knowledge about how to live, but chose to reject it. As a result, God rejected—cut off—man from access to Him. And this cuts men off from the very solutions to the terrible, worsening problems that they now have.”

Concluding his address, President Bush stated, “This is a decent and honorable country…We’ve been through a lot together. We’ve met challenges and faced dangers, and we know that more lie ahead. Yet we can go forward with confidence—because the State of our Union is strong, our cause in the world is right, and tonight that cause goes on.”

More does lie ahead for the United States, as well as for Canada, Britain and other sister nations of the West. And that future will soon bring a sobering reality—one the vast majority will not expect…