This website requires the use of Javascript to function correctly. Performance and usage will suffer if it remains disabled.
How to Enable Javascript
Nurture Your Mind with Nature

Nurture Your Mind with Nature 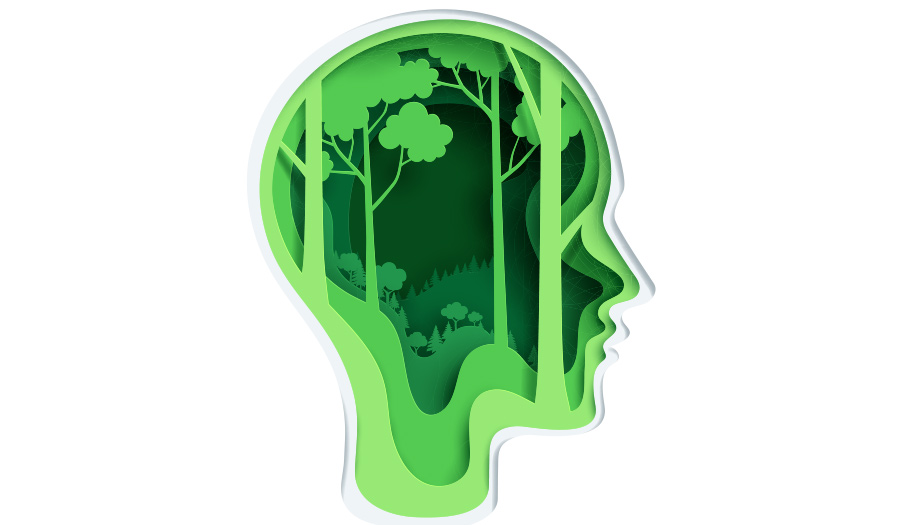 Once a favorite pastime, spending time outside in nature is becoming a thing of the past for many Americans.

“Nearly half of the U.S. population doesn’t participate in any outdoor recreation at all, and only 17.9 percent got out at least once a week in 2018,” Outside magazine reported, citing a 2019 study by the Outdoor Foundation. “The result? One billion fewer hikes, climbs, rides, and other outdoor excursions in 2018 than in 2008. Even kids are staying inside. Children took part in 15 percent fewer outdoor activities in 2018 than they did six years before.

“The study suggests barriers like work, technology, and cost of entry prevent individuals from playing outside. ‘[The study] indicates that we’re becoming an indoor nation,’ said Lise Aangeenbrug, the executive director of the Outdoor Foundation, the philanthropic extension of the Outdoor Industry Association (OIA). ‘People are missing out on the joy, learning, and community building that the outdoors can provide. Whether you bike, hike, ski, hunt, run, or fish, it’s a lost opportunity.’”

Although most would agree that getting outside for a breath of fresh air is a good idea, very few do. According to the United States Environmental Protection Agency, Americans spend a whopping 87 percent of their time indoors and an additional 6 percent inside vehicles. This leaves a paltry 7 percent of time spent outdoors.

This trend is not limited to Americans. According to a British wildlife study commissioned by Jordan Cereals, almost 70 percent of Britons described themselves as losing touch with nature, with nearly one in seven saying that they had not visited the countryside in two years.

These findings are eye-opening. More could be cited for other parts of the world. And consider that the above studies were before the COVID-19 pandemic, which forced people to spend even more time indoors than they had previously. If such studies were to be redone today, the numbers would reflect an even more significant disconnect with the natural world.

Recall that Ms. Aangeenbrug referred to spending time in nature as an opportunity. This connotes a benefit for those who take advantage of it. Merriam-Webster defines opportunity as “a favorable juncture of circumstances” and “a good chance for advancement or progress.”

Over time, people have lost touch with nature and its marvels. Many may not be aware of the potential for favor and advancement that time outdoors holds. We will examine several inspiring ways that time in nature can improve your life.

Studies have shown that living in a city is a risk factor for developing a mental disorder, while living close to nature benefits mental health. A central brain region involved in stress processing, the amygdala, has been proven to be less active during stress in people living in rural areas compared to those who live in cities.

“But so far the hen-and-egg problem could not be disentangled, namely whether nature actually caused the effects in the brain or whether the particular individuals chose to live in rural or urban regions,” Sonja Sudimac, a predoctoral fellow in the Lise Meitner Group for Environmental Neuroscience and lead author of a new study, stated.

To achieve causal evidence, researchers from this team examined brain activity in regions involved in stress processing in 63 healthy volunteers before and after a one-hour walk in Grunewald forest or a shopping street with traffic in Berlin using functional magnetic resonance imaging (fMRI). The study’s results revealed that activity in the amygdala decreased after the outdoor walk, suggesting that nature elicits beneficial effects on brain regions related to stress.

“The results support the previously assumed positive relationship between nature and brain health, but this is the first study to prove the causal link. Interestingly, the brain activity after the urban walk in these regions remained stable and did not show increases, which argues against a commonly held view that urban exposure causes additional stress,” explained Simone Kuhn, head of the Lise Meitner group.

The authors showed that nature positively impacts brain regions involved in stress processing and can already be observed after only a one-hour walk. Even short exposure to natural surroundings decreases amygdala activity, suggesting that a walk outdoors could serve as a preventive measure against developing mental health problems and buffering the potentially disadvantageous impact of the city on the brain.

The results align with a previous 2017 study in Scientific Reports that showed that city dwellers who lived close to the forest had a physiologically healthier amygdala structure and were presumably better able to cope with stress.

Additional research shows the benefits of soaking in the great outdoors go well beyond stress reduction.

The study showed that not only does exposure to nature make us feel better, it also makes us more effective.

On the other hand, those with less access to nature often experience physical and mental health problems. A Johns Hopkins University study found that childhood asthma sufferers experienced 20 percent more symptomatic days for every 1,000 feet they were from a green space compared to those living next to them.

In addition, a compilation of studies published by The Conversation found that urban dwellers in Australia have a 39 percent higher risk of mood disorders and a 21 percent added risk of anxiety disorders versus their rural counterparts.

Clearly, our exposure to nature directly affects our health. Losing touch with it seems to have adverse effects. In contrast, regular exposure improves our overall wellbeing and, according to Business Insider, can even lower our mortality rate by up to 12 percent.

Losing touch with nature can ultimately have a detrimental impact on our survival as a species. Urbanization and separating ourselves from the natural environment are making us forget where our sustenance comes from.

Directly tied to our overall health is the food we eat. In every society, knowledge of what food is and is not is passed down from generation to generation. What, where and how to extract essential nutrients from our natural environment are all matters of survival and are increasingly being outsourced to big businesses. Individually being unable to identify, grow or harvest food in its natural state is increasing and can be a big problem.

Daily Express published a study in which 65 percent of Britons 25 years and under did not know what a pruner was, while a striking 10 percent under 35 were unfamiliar with a hose—both of which are essential for gardening. Even more shocking is that 77 percent had never grown vegetables in a garden.

In a later study conducted in Australia, 92 percent of children between 6 and 17 years of age did not know bananas grew on trees, 50 percent did not know beetroots grew in the ground, and 75 percent could not identify a radish or a leek, according to News.com.au.

“It’s a shame that so many Aussie kids seem unaware of where fresh fruit and veg come from, especially in a country that is home to such beautiful and delicious produce,” world-famous chef Jamie Oliver told the media outlet.

Some have attempted to take on the task of educating people about their food. Yet the issue of food ignorance continues to grow. Parents are increasingly unable to pass this vital survival information to the next generation.

A lack of understanding of nature and the food that comes from it becomes an issue of global proportions. As the human population explodes beyond 8 billion and our arable land continues to decrease, our food supply goes down. The Guardian reported in 2015 that over the previous four decades, “nearly 33% of the world’s adequate or high-quality food-producing land has been lost at a rate that far outstrips the pace of natural processes to replace diminished soil.”

Conversely, immersing yourself in nature and learning about proper food and nutrition will open the door to robust health that cannot be attained otherwise.

The idea that man is tied to nature is not new. In the Bible, Genesis 2:7 states that man was created from the “dust of the ground.” God directed the first humans to “dress and keep” the surrounding environment (2:15) and to “have dominion over the fish of the sea, and over the fowl of the air, and over every living thing that moves upon the Earth” (1:28).

Mankind was to work and till the land for food, while guarding and protecting the integrity of the plants and animals. Logically, the way to accomplish all this most efficiently and effectively is to have a rich understanding of nature. This only becomes possible by learning and appreciating the different, intricate and essential natural beauty that surrounds us.

The apostle Paul added, “For the invisible things of Him from the creation of the world are clearly seen, being understood by the things that are made, even His eternal power and Godhead” (Rom. 1:20).

God, the Creator of the planet, nature and mankind, clearly desires the human beings He made to spend time in the natural world He also devised. He designed us to benefit from time in nature. This is one aspect of how He “fearfully and wonderfully made” us (Psa. 139:14).

Wise King Solomon wrote, “The light is pleasant, and it is good for the eyes to see the sun” (Ecc. 11:7, New American Standard Version). It is good for you to get outdoors, away from the stale air and artificial light of your home or office. It starts with making a conscious effort to increase the amount of time you spend outside each day.

If you have not taken the time to connect with Creation, it is not too late. Commit to starting a small garden in your backyard next spring or to nurture a hanging pot in your kitchen. Make a plan to visit a botanical garden. Pledge in the coming days to visit a local park or even simply take a walk around your neighborhood for contact with fresh air and trees. Try an outdoor sport such as tennis or basketball or an outdoor hobby such as fishing or bird-watching.

These are just a few ways for you to regularly incorporate contact with your natural surroundings.

We have seen that a one-hour period in nature can make a big difference. Yet, if it is challenging to fit this into your schedule, even a small commitment can help. Environmental Science & Technology reported that “even small doses of outdoor exercise can have remarkable effects on mental health…In a meta-analysis of 10 studies, [Jules Pretty and Jo Barton of the University of Essex] found that getting outside—and moving—for as little as five minutes at a time improved both mood and self-esteem.”

So get outside! Start with five minutes and work up from there. Boost your health and well-being by doing what God designed you to do—be in touch with nature.