This website requires the use of Javascript to function correctly. Performance and usage will suffer if it remains disabled.
How to Enable Javascript
What Makes Us Human – Is It ‘Overlooked’ DNA?

What Makes Us Human

Is It ‘Overlooked’ DNA?

Scientists stumbled upon an unlikely answer hidden in the part of our DNA that has previously been considered useless. This discovery is just the start of what makes our minds unique. 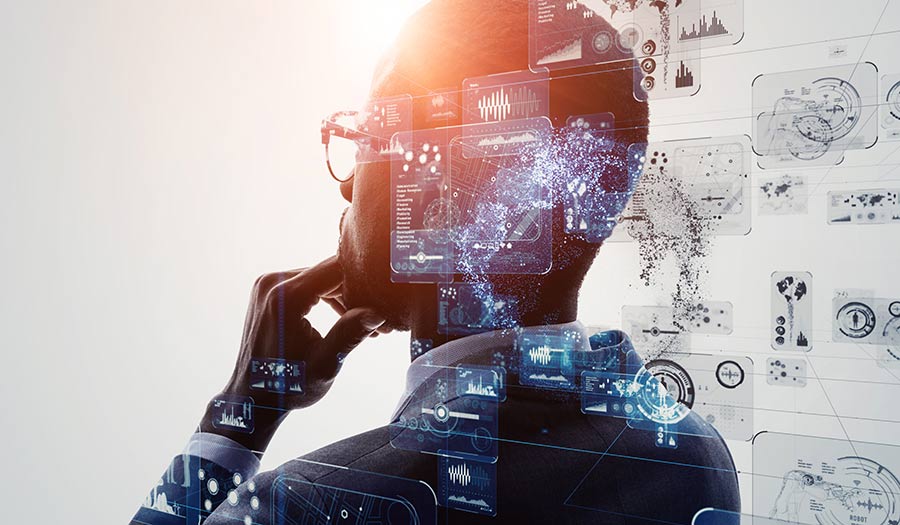 Genetically, chimpanzees do not look much different from humans. Our DNA sequence is nearly 99 percent identical.

Yet in terms of mental capacity, chimps and people are vastly different. Trying to explain the reason for these differences has long perplexed researchers.

“How did it come about that humans can use their brain in such a way that they can build societies, educate their children and develop advanced technology?” Dr. Johan Jakobsson, professor of neuroscience at Lund University in Sweden, asked in the journal Cell Stem Cell.

Most studies point to the fact human brains are three times larger than those of chimps. Also, the cerebral cortex—which allows for memory, attention and awareness—contains twice as many cells in a human than the animal. Scientists have even found that the outer layer of our brains are looser than in apes—allowing more adaptability in learning.

But the extra gray matter cannot be enough to give mankind vastly greater capabilities than any monkey. This is where Dr. Jakobsson and a team of stem cell researchers decided to look deeper—into the part of DNA that has previously been overlooked, so-called “junk DNA.” This non-coded protein constitutes 98 percent of our DNA, yet was thought to carry no function.

Now, Dr. Jakobsson and researchers believe it can explain why our brains work differently from animals.

“Previously, researchers have looked for answers in the part of the DNA where the protein-producing genes are—which only makes up about two percent of our entire DNA—and examined the proteins themselves to find examples of differences,” Dr. Jakobsson said.

This suggests the human brain’s development stemmed from “genetic mechanisms that are probably a lot more complex than previously thought,” he said.

The study’s lead author believes that in the future the new findings may also yield answers to questions about psychiatric disorders such as schizophrenia, a disorder that appears to be unique to humans.

“But there is a long way to go before we reach that point, as instead of carrying out further research on the two percent of coded DNA, we may now be forced to delve deeper into all 100 percent—a considerably more complicated task for research,” he concludes.

Every study attempting to answer the great question of why man’s brain is unique ends similarly. More research is needed before drawing conclusions…It will take years before these findings result in treatments for…and on it goes.

While these cliffhangers leave us yearning for more, it does underscore a unique quality of the human mind that science is only beginning to see.

Consider again the qualities man possesses that are unique among all living creatures. Ask yourself: Why does man have so many distinctive characteristics?

Meaning of life: The simple act of asking about life’s meaning and purpose makes man unique. Only humans have sought through science and religion to try to understand their origin. No animal contemplates its reason for living—nor would it be willing to live or die for specific values and ideals.

Self-consciousness: Beyond a simple recognition of self (as seen in a few animals), man can step back and become a spectator, critic or admirer of the world around him.

Awareness of death: While animals have a survival instinct, man is aware he will one day die. He can also have a deep fear of losing his life. Nearly every culture performs a funeral ritual. This does not happen in the animal world.

Understanding time: Animals are only able to relate time to themselves; they have no ability of relating time to third parties. Humans can wonder, speculate and search the annals of history for lessons, and apply those lessons to goals far into the future.

Connections between words: While animals can understand simple words or tones, they do not comprehend syntax or communicate in complex sentences. Human beings have developed hundreds of languages (and thousands of dialects), even though they are born without the ability to speak.

Malleability: Humanity is able to adapt to its surroundings. We wear clothes, build shelters and modify our environment to suit our needs.

Humor: No other creature is able to appreciate, create and express humor. Not only does it require creativity, but humor also requires the ability to detach oneself from one’s surroundings to see the odd, surreal or ironic.

Appreciation of beauty: Man puts value in things that do not sustain him, so that he can enjoy observing a sunset, a work of art, jewelry or the intricate design of a flower.

For example, take a person to New York’s Metropolitan Museum of Art, and he will be moved by the seemingly limitless number of paintings and sculptures on display, dating hundreds of years. Take a dog to the same museum, and it will be more excited to sniff around for food and fire hydrants.

Lack of harmony with nat–ure: When left to its own, nature will reach balance and harmony. Only man disrupts that natural balance through deforestation, changing the course of rivers, polluting the air, water and soil, mining for resources, and so forth.

A sense of morality: Animals always take the path of least resistance. They do not have a conscience or sense of right and wrong. On the other hand, people will go so far as to control their thoughts based on what they consider right or wrong.

Desire to worship: No matter what part of the world or his culture, man exhibits a desire to seek, follow and worship a higher power. Animals do not.

Psychiatric disorders: It appears humans are most susceptible to complex mental and behavioral issues such as schizophrenia, bipolar disorder, depression and anxiety. There is no proven evolutionary reason for this.

Love: While some animals form lifelong relationships for the purpose of reproduction, none exhibit the same human characteristics of love, in which a couple shares experiences, goals, dreams, hopes and aspirations.

Some of these qualities can be explained by the unique traits of the human brain itself. However, this does not tell us why human beings would have developed an evolutionary need for all of them (as is supposed humans and chimpanzees began separate evolution paths five to six million years ago). Ultimately, the mystery of the human mind transcends what scientists have found so far.

Where scientists fail to fully explain the reason for mankind’s unique qualities, philosophers and religionists step in. Those in these two studies also look into why the human mind works as it does.

There are two main camps on why the human mind possesses such astonishing capabilities. Philosophers, scientists and religionists typically support these two theories above the rest. One argument is that man’s mind is entirely physical—merely more complex than other mammals; the other is that man has an immortal soul.

One side relies entirely on the physical realm of science, what can be learned from the five main senses of sight, taste, hearing, smell and touch. The other side opens the door to a spiritual realm, where man is more intelligent because of an immortal soul, which, according to the argument, animals do not have.

If you take the completely physical side, one would have to conclude that man could never solve his problems. He never has even remotely come close in the past, and, after many thousands of years of trying, why should he believe he suddenly will? If this is the answer, then these problems are merely distinctly human traits, and humanity will have to continue to work around them as long as he can sustain his existence.

The opposing party purports that each human has an immortal soul, setting him apart from the animal. Can this side be proven?

As this theory is generally brought forward by Christian denominations, the most logical place to look for the answer is the Bible.

Even though many have a copy of God’s Word in their homes, however, the answer is not what most think!

Start reading in the book of Job: “There is a spirit in man: and the inspiration of the Almighty gives them understanding” (Job 32:8).

Many jump on this scripture as a proof text for belief in an immortal soul. Yet this is simply not the case. Man is a “soul,” which means living, breathing flesh (Gen. 2:7). The idea that each human has an immortal component is not supported by the Bible.

If neither of the most popular ideas can be proven, what is the answer? Something is setting apart man and beast—but what? And why do problems remain unsolved, despite the best minds being solely focused on solving them?

The beginnings of an answer come from the same passage in Job: the “spirit in man.”

The New Testament also reveals more about this spirit in man, “For what man knows the things of a man save the spirit of man which is in him?” (I Cor. 2:11).

The same passage in I Corinthians concludes, “Even so the things of God knows no man, but the Spirit of God.”

An animal cannot amass a wealth of physical knowledge because it does not have the spirit of man. Likewise, man cannot accrue spiritual knowledge without an additional element—God’s Spirit.

This second element introduced reveals another conundrum man cannot solve. Though mankind is capable of great technological progress and scientific understanding, it cannot rid itself of its greatest woes—famine, disease, poverty, illiteracy, war…

World peace is elusive because it cannot be found by man’s spirit alone. Notice: “The way of peace they know not; and there is no judgment in their goings: they have made them crooked paths: whosoever goes therein shall not know peace” (Isa. 59:8).

This verse explains the paradox of the mind of man. While there can be stunning achievements—awesome advancement—mankind’s problems only grow worse.

As long as humanity looks to government ideals, think-tanks, philosophers and the religions of men, it cannot break free from its problems.

The reason man cannot solve his most pressing problems is because they are spiritual problems, meaning they need spiritual solutions.

This spiritual knowledge is found solely through the Bible. The knowledge is unlocked only when a person has the Spirit of God—which gives understanding—working alongside or in the mind of someone whose mind God has opened (John 6:44).

Each article produced by The Real Truth brings the answers to the spiritual problems of man. If you wish to continue to learn more about the only lasting solutions to man’s problems, read more on this website. 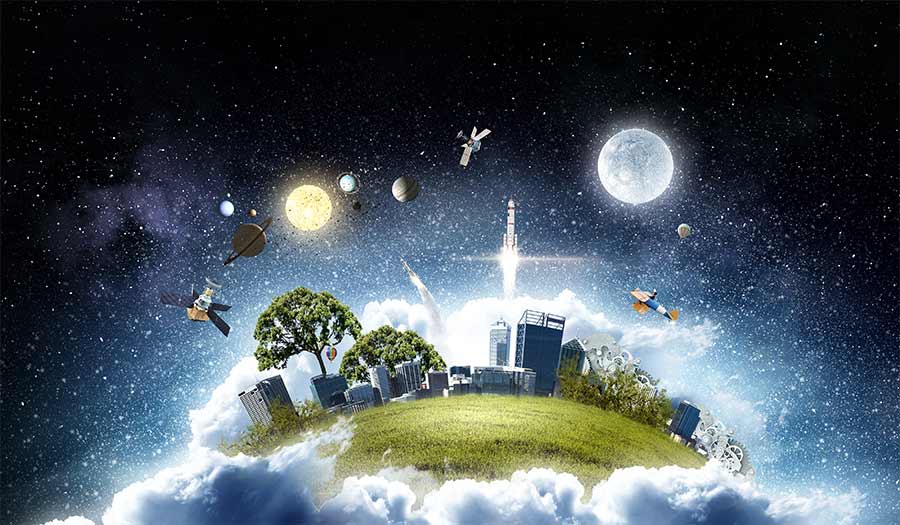 Designed for Discovery – Part 1: Why the Earth Is Unique
The Earth is filled with inferences of design. Here is a look at some of these unique and inspiring markers.