This website requires the use of Javascript to function correctly. Performance and usage will suffer if it remains disabled.
How to Enable Javascript
Analysis: Russian Military Buildup Raises Stakes as Fighting in Ukraine Intensifies 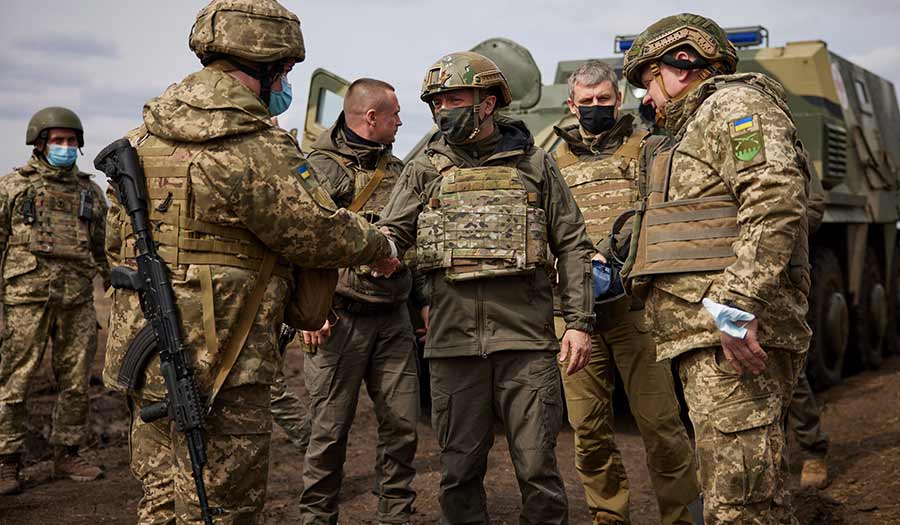 MOSCOW/KYIV/WASHINGTON – Dozens of troop carriers and missile launchers sit on flatbed wagons lining up along tracks running through southern Russia, in a region bordering Ukraine.

Tanks are parked in columns beside the railway, which runs parallel to the M4 highway. Military trucks rumble past, heading toward the southern city of Rostov-on-Don, close to the border.

Ukraine and Western countries accuse Russia of sending troops and heavy weapons to support proxy fighters who seized a swathe of the eastern Donbass region in 2014.

Moscow denies it is part of the conflict in eastern Ukraine and says it provides only humanitarian and political support to the separatists.

The recent deployment of hardware close to Ukraine’s border, captured this week on video seen by Reuters, is what a source close to both the Kremlin and to pro-Russian separatists said was a deliberate show of force at a time of rising tensions between the former Soviet states.

Two sources close to separatist leaders in Donbass said skirmishes were increasing around the separatist-held city of Donetsk, and Kyiv has reported that five of its soldiers have been killed in fighting there this week.

But the military buildup is not a sign of a major escalation in the conflict, according to the source and the two people close to the separatists.

“Moscow is doing it openly, deliberately uncovering tanks in the daytime. This is not how war is prepared, this is just a show of strength,” said the source close to the Kremlin and to separatists.

Since the build-up, it has said it is ready to defend itself against any attack in its eastern Donbass region, a mainly Russian-speaking area that fell to pro-Russian separatists who attacked in 2014.

Kyiv says 14,000 people have been killed in the fighting.

Washington and the NATO alliance have accused Russia of a “provocative” build-up, with unverified images of army trucks and missile launchers, taken from the ground and by satellite, widely circulating on social media.

For its part, Russia accuses Ukraine of unspecified provocation and says it can move military assets around its country as it sees fit.

Ukraine is no military match for Russia and it sits outside the NATO alliance. Kyiv lost its Black Sea region of Crimea to Russian troops in 2014 without a fight.

Ukraine turns to the United States and the European Union for support against Russia, but beyond sanctions it is unclear what it can expect from its Western allies. Many years of lobbying for NATO membership have yet to bear fruit.

For Russian President Vladimir Putin, the threat of further economic sanctions by the West looms if countries deem Russia responsible for stoking the conflict.

Russian state banks and oil firms have been hit hard with U.S.-led sanctions, and, while reserves remain healthy at $575 billion, they could take a significant hit if the punishments are harsh.

“Today we are calculating all scenarios from the most critical to the most light, and I emphasize once again—it all depends on Putin,” Mr. Danilov said on Wednesday.

The Kremlin said Friday it fears a resumption of full-scale fighting in eastern Ukraine and could take steps to protect Russian civilians there, a stark warning that comes amid a Russian troop build-up along the border.

Mr. Zelenskiy said Friday after visiting troops in the east that 26 Ukrainian soldiers have been killed so far this year. Increasingly frequent breaches of a July truce agreement mean that “we again face the need to establish a cease-fire,” he said.

During a call with Mr. Putin on Thursday, German Chancellor Angela Merkel “called for the removal of these troop reinforcements in order to achieve a de-escalation of the situation.”

In a call on Friday, U.S. Secretary of State Antony Blinken and French Foreign Minister Jean-Yves Le Drian “discussed the need for Russia to end its dangerous and irresponsible rhetoric, its military build-up in occupied Crimea and along Ukraine’s borders, and unilateral Russian provocations along the line of contact in eastern Ukraine,” State Department spokesperson Ned Price said.

In response, Mr. Peskov said Russia is free to deploy its troops wherever it wants on its territory. He accused the Ukrainian military of an “escalation of provocative actions” along the line of control in the east that threatens Russia’s security.

“The Kremlin has fears that a civil war could resume in Ukraine. And if a civil war, a full-scale military action, resumes near our borders that would threaten the Russian Federation’s security,” Mr. Peskov said. “The ongoing escalation of tensions is quite unprecedented.”

In Kyiv, Colonel-General Ruslan Khomchak, the commander-in-chief of Ukraine’s armed forces, rejected Moscow’s claims of the alleged Ukrainian preparations for an offensive in the east as part of a “disinformation campaign” and a “hybrid war.”

A Turkish Foreign Ministry official said Friday that the United States has notified Turkey that two U.S. warships will sail to the Black Sea on April 14 and April 15 and stay there until May 4 and May 5.

Such visits by the U.S. and other NATO ships have vexed Moscow, which long has bristled at Ukraine’s efforts to build up defense ties with the West and its aspirations to eventually join NATO.

Russian Foreign Ministry spokeswoman Maria Zakharova warned Friday that Ukraine’s NATO bid “wouldn’t only lead to a massive escalation of the situation in the southeast but could also entail irreversible consequences for the Ukrainian statehood.”