This website requires the use of Javascript to function correctly. Performance and usage will suffer if it remains disabled.
How to Enable Javascript
Pandemic Set to Hit Impoverished Countries Hardest 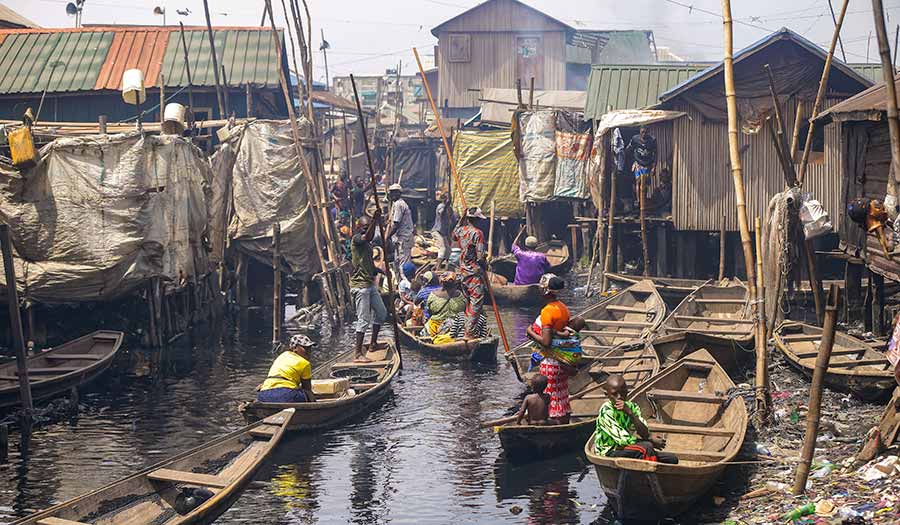 AP/Sunday Alamba
People travel by canoe in the floating slum of Makoko in Lagos, Nigeria (March 21, 2020).

At first, the coronavirus was just a rumor along the dusty lanes of the displaced persons’ camp that Habiba Ali calls home. It seemed fantastical: an illness sweeping the world far beyond Somalia’s borders, killing thousands of people and sending some of the richest countries into panic.

Then Somalia’s first virus case was announced on March 16, and one of the world’s most fragile nations staggered even more. Nearly three decades of conflict, extremist attacks, drought, disease and a devastating outbreak of locusts have taken a vast toll.

“We have been overcome with an extraordinary fear about the disease,” Ms. Ali said as she worried about her six children. “And we are even avoiding shaking hands with people. Our fear is real, and we are helpless.”

Somalia also has lacked the capability to test for the new virus, meaning samples are sent abroad and results are delayed for more than a week. Quarantine tents have been erected around an old port in Mogadishu.

Some 6 million Somalis live in squalid conditions, many of them uprooted by past disasters. Most are acutely hungry. Hundreds of thousands cling to existence on the fringes of Mogadishu, their homes of corrugated metal, even hanging cloth, jammed side-by-side. Access to water is severely limited.

The Somalia director for Action Against Hunger, Ahmed Khalif, told AP: “It’s going to be beyond anyone’s imagination. A widespread outbreak of the disease would be catastrophic to the people who are already vulnerable.” The virus does not discriminate among rich or poor, he stated.

United Nations Secretary-General Antonio Guterres warned that the world faces the most challenging crisis since World War II, confronting a pandemic threatening people in every country, one that will bring a recession “that probably has no parallel in the recent past.”

“We are facing a global health crisis unlike any in the 75-year history of the United Nations—one that is killing people, spreading human suffering, and upending people’s lives,” the report said. “But this is much more than a health crisis. It is a human crisis. The coronavirus disease (COVID-19) is attacking societies at their core.”

“Let us remember that we are only as strong as the weakest health system in our interconnected world,” he said. “It is essential that developed countries immediately assist those less developed to bolster their health systems and their response capacity to stop transmission.”

But many areas in Western nations have seen an exponential increase in the spread of the coronavirus and have needed emergency aid, which bodes ill for countries with fewer resources and greater social gaps between the wealthy and impoverished. “This is a disease which has overwhelmed more sophisticated health care systems of countries than ours,” Somalia President Mohamed Abdullahi Mohamed warned in a public awareness campaign.

From Jakarta to Johannesburg the same story is playing out in some of the world’s poorest regions, where tens of millions live in crowded slums without adequate water, sanitation and access to health care.

“The future of this pandemic to a greater extent will be determined by what happens in very large and densely populated countries,” Dr. Michael J. Ryan, executive director of the World Health Organization’s health emergencies program, reported.

In Mumbai, 53-year-old Abrar Salmani lives with 11 family members in a house so small that many regularly sleep outdoors in the Bhim Nagar slum. The unemployed weaver said most families do not have access to water and rely on communal washrooms for bathing. “Our demands to have a water pipeline haven’t been answered for years,” he said.

In the Gaza Strip, where more than half of its 2 million residents are unemployed, the arrival of the virus prompted the territory’s Hamas rulers to order the closure of cafes and wedding halls, and to cancel Friday prayers at mosques. Residents were urged to stay at home and refrain from close contact. But with chronic power shortages of at least eight hours a day, it is hard for Gazans to stay inside their homes.

Iran, on top of reporting the highest toll of confirmed cases and deaths from the virus of any country in the Middle East, is also battling an epidemic of alcohol poisonings. A 5-year-old boy is now blind after his parents gave him toxic methanol in the mistaken belief it protects against the virus.

An Iranian doctor helping the country’s Health Ministry told The Associated Press in March that around 480 people have been killed and 2,850 people sickened from ingesting methanol. “Other countries have only one problem, which is the new coronavirus pandemic. But we are fighting on two fronts here,” said Dr. Hossein Hassanian, an adviser to Iran’s Health Ministry. “We have to both cure the people with alcohol poisoning and also fight the coronavirus.” Videos aired by Iranian media showed patients with IVs stuck in their arms, laying on beds otherwise needed for the fight against the coronavirus.

Across Africa, home to some of the world’s fastest-growing cities with badly strained infrastructure, authorities worry that the virus could swiftly spread through slums and impoverished townships. Tear gas and gunfire have been used in a couple of cities in a rough bid to enforce social distancing.

On the first day of coronavirus restrictions in Kenya, police fired tear gas at people crowding to board a ferry in the port city of Mombasa ahead of the overnight curfew. The tear gas caused hundreds of people to touch their faces as they vomited, spat and wiped away tears, increasing the chance of the virus’ spread, Amnesty International Kenya and 19 other human rights groups said in a statement.

In Nigeria’s seaside city of Lagos, Africa’s largest with more than 20 million people, authorities scrambled to spread the word about the virus among slum dwellers. In the vast Makoko slum, where shacks are built on stilts and sewage runs into the sea, residents listened with a mix of fear and defiance. Biodun Edward scooped up a handful of the murky water and drank it. “Let [authorities] come and test it, there’s no disease here,” he declared.

Lagos traders are also worried after nonessential markets were shut down and the country’s cases rose. “If we do not go out, we cannot eat, our government did not make any provision for us,” Bolaji Tajudeen said.

In South Africa’s crowded, impoverished townships, tens of thousands of workers pack into groaning minibus taxis for commutes with little or no protection. At home, extended families squeeze into a single room or two and communities draw water from collective taps.

“Coronavirus scares us since we’re living in a shack,” said one Soweto resident on the outskirts of Johannesburg, Mando Masimola. “We don’t know how we’ll survive if the virus infects us.”

“Social distancing is very impossible here,” said Sipho Moyo, a manicurist who lives in Johannesburg’s Hillbrow neighborhood. “I share a room with two other people. The next room has four people, another room has a family. We all share one bathroom and a kitchen. We all try our best to maintain distance and cleanliness, but it is difficult, as you can imagine.”

South Sudan’s recovery from civil war became more challenging as the government suspended the training of nearly 50,000 unified forces as a precaution. The country, its health system shattered by conflict, has not recorded a virus case.

India’s 21-day lockdown has effectively kept 1.3 billion people at home for all but essential trips to places like markets or pharmacies. But the world’s largest lockdown has turned into a humanitarian crisis for India’s improvised workforce.

They mostly live in squalid housing in congested urban ghettos. But with no daily earnings, no savings, and thus no way to buy food, they must head to their home villages to survive.

Train services are suspended, taxis are unaffordable, and the hundreds of buses brought to the outskirts of New Delhi to ferry people home lacked enough seats.

That leaves walking. The government told India’s top court last month that 500,000 to 600,000 migrants have walked to their villages from cities.

Shiv Kumari, 50, said she was thrown out of her rented accommodation in the northern state of Haryana by her landlord. She and her 28-year-old son packed their bags and set off on an arduous journey of 550 miles to their home.

As the crisis worsened, authorities scrambled to arrange transport, shelter and food for them. But it was too late. Some people died under the physical strain of the relentless walking, while others were killed in road accidents. Some were beaten at state borders by police, who said they were just trying to manage the crowds of people.

Experts warn that the virus could have an even deeper impact in Latin America, potentially killing scores of the poorest people, who must work every day to feed their families, live in unsanitary conditions and lack proper medical care.

For hundreds of thousands of Haitians who earn a few dollars a day selling goods on the street, quarantine would mean near-starvation. “People are not going stay home. How are they going to eat?” said Marie-Ange Bouzi, who sells tomatoes and onions on the street of Haiti’s capital. “Haiti isn’t structured for that.'”

In Chile, many coronavirus diagnoses have been in upper-middle-class neighborhoods, in people just back from Europe, particularly Italy. Health Minister Jaime Manalich has complained that wealthy residents of the Las Condes and Vitacura sections of Santiago, the capital, are routinely violating required quarantines after they tested positive or encountered someone who did.

While there are more poor people in other regions of the world, Latin America remains the region in which the greatest proportion of wealth is held by a small number of citizens.

“Latin America is the most unequal region in the entire world. We’re talking about class disparities that are unlike anywhere else on the planet,” said Geoff Ramsey, a researcher at the Washington Office on Latin America.

Some Latin American governments were striving to help workers whose informal jobs provide them no access to the social safety net, including unemployment payments or severance packages. But Brazil’s government has no such plans.

The lack of help worries Patricia Martins, who lives in Brazil’s largest favela, or slum, Rocinha in Rio de Janeiro, which houses about 70,000 people in brick homes packed tightly together on steep slopes overlooking the Atlantic Ocean. Clean water is sporadic, sewage often runs in the streets and winding alleys and soaring staircases make it difficult for medical professionals to retrieve a sick person in an emergency.

“My concern is that if someone gets that sickness, this is going to be a focal point, like it’s a focal point for tuberculosis and for HIV,” said Ms. Martins, a 45-year-old cleaning woman.

“The person who’s a cleaner, the person who counts on that money to survive, to sustain their family—they’re going to bring in money from where?” she said of anti-virus measures. “If everything stops, it will end people’s lives! There will be nothing people can do to survive!”

“There’s a large population of working people…that are just going to be unable to simply stay home,” Mr. Ramsey said.

“We’re looking at a region that’s going to be deeply, deeply impacted by the global pandemic.”