This website requires the use of Javascript to function correctly. Performance and usage will suffer if it remains disabled.
How to Enable Javascript
Remembering Bastogne

The 75th anniversary of the Battle of the Bulge brings the opportunity to remember the things that really matter. 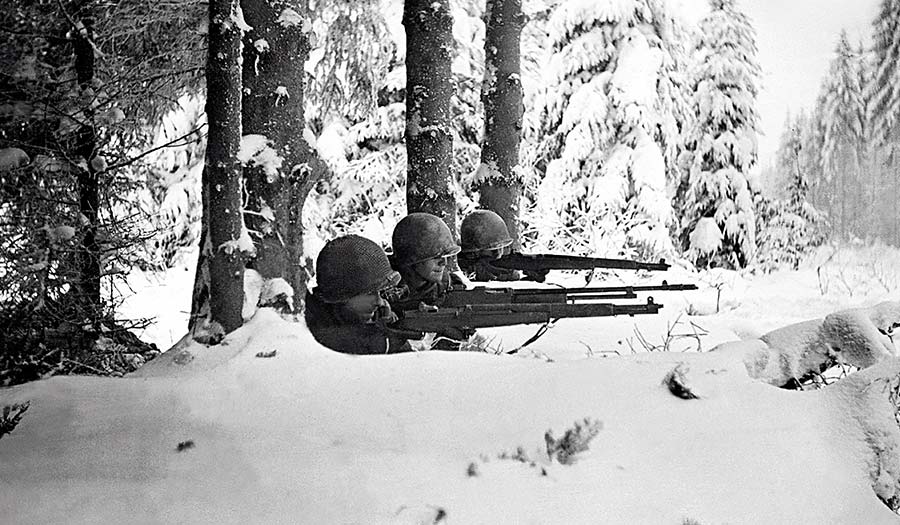 Tony Vaccaro/Getty Images
Three U.S. infantrymen in the snow during the Battle of the Bulge (Jan. 1945).

For most Americans, World War II is difficult to truly comprehend. It is something that occurred decades ago on battlefields oceans away. This is not the case for those living in Europe, where war is part of the landscape—literally. Shell holes from both world wars litter fields in France and Belgium. Machine gun nests still lay rusting in the thick Ardennes forest.

It was in those woods in Belgium I had an opportunity to better understand war and its effects when invited on a tour of the Bastogne War Museum.

The Battle of the Bulge, which took place between December 16, 1944, and January 25, 1945, was the largest and bloodiest for the U.S. in the second world war. Adolf Hitler risked everything by pulling his strongest units from the Eastern Front and throwing them against the U.S. and British forces in the west, which were fatigued and stretched thin on supplies.

The German strategy was simple—push west to Antwerp, Belgium, and split the Allied line in two, forcing them to negotiate peace.

The path to Antwerp would go through the quiet Ardennes forest. The Ardennes Offensive, as it is also called, would prove to be Hitler’s last big gamble.

Yet these cold historical facts and decades-old battle plans obscure the inspiring stories of endurance and tenacity the museum narrated through the eyes of four characters—a German and American soldier, along with a teacher and one of her students. Each presented a different perspective on the war.

Visiting this historic site helped me better understand how individual lives were involved.

On December 16, 1944, some 30 German panzer divisions, made up of hundreds of thousands of men and nearly 1,500 tanks, attacked the Allies across 85 miles of dense woods.

The timing for the assault was strategic. Attacking in winter meant ill-prepared Allies would face freezing rain, snow drifts and record-breaking low temperatures. (It is believed more Americans died from frostbite than gunfire.) This, along with thick fog, severely slowed any Allied counterattack by air, which would have been the fastest way for them to respond.

The Allies, caught by surprise, retreated from the full firepower of the Wehrmacht. Within days, the Germans gained a triangular bulge of territory on the Western Front, giving the battle its title.

The “Screaming Eagles,” as they were known, scrambled to form a perimeter around the city. Yet the rush left the group, which had already endured some of the fiercest combat since D-Day, outnumbered five to one, lacking winter gear, food, medical supplies and ammunition, and missing a number of senior officers who were elsewhere. Cloudy weather prevented resupply from the air, and only 40 medium and light tanks could be mobilized against the superior German panzer divisions.

Taking in the surroundings while riding to and from the museum, I tried to imagine how the GIs felt hunkered down in frozen foxholes, cautiously watching day and night for enemy movements—the medical and support units who doubled as infantry to fill in gaps in numbers and sent to hold thin sections of the front line—even the large trees exploding overhead from enemy artillery fire.

The German leaders knew of the Americans’ dire situation. On December 22, the German commander sent an emissary to request surrender. U.S. officers were given two hours to comply or else face “total annihilation.”

The Americans’ tenacity was best summed up in their leading general’s terse response: “NUTS!”

A U.S. lieutenant helped the Germans understand the tongue-in-cheek reply: “If you continue this foolish attack, your losses will be tremendous.”

Hitler knew his last-ditch Ardennes Offensive was in jeopardy if Bastogne was left in Allied hands. On Christmas Eve, the Luftwaffe—the German air force—attempted to bomb out the beleaguered Americans. Seven medium bomber planes unloaded 7,000 pounds of explosive munitions, with one bomb landing on a military hospital killing 20 patients and a Belgian nurse. By one account, that night was the first time soldiers felt a sense of doom. Many “shook hands with their comrades,” according to WWII historian S.L.A. Marshall, telling each other it would be “their last night together.”

But through a combination of resourcefulness and fortitude, the 101st held out for seven brutal days.

For one, there was a benefit of being encircled: uninterrupted lines of communication. As Germans had to move around to try to poke holes, Americans could quickly move their tanks to ward off assaults. Ultimately, though, it was a matter of holding on and refusing surrender against the odds.

The sheer will and determination of the Allied troops had somehow outlasted the bullets, tanks and strategy of the German war machine, which was among the most prolific the world had ever seen.

More than 1 million Allied troops, including 500,000 Americans, fought in the Battle of the Bulge. Americans suffered more than 89,000 casualties and Germans 100,000. The Germans never fully recovered, being pushed back into their homeland until Berlin was sacked by the Soviets four months later.

The Real Truth’s editorial staff does not endorse war. But we do endorse strength of character.

Anniversaries like the Battle of the Bulge and others associated with WWII such as the Attack on Pearl Harbor, the Battle of Midway, and storming Normandy on D-Day, are an opportunity to reflect on a different time in American history.

Adversity introduces a man to himself, as the saying goes. And war brings out the worst—and sometimes the best—in people. If nothing else, it becomes one of those rare times people put away their differences and pull together for a collective purpose.

Those known as the Greatest Generation defended America and its values in the 1940s. Were they perfect? No. But this was never the question. The point is they were different, especially compared to the average person today.

The Greatest Generation (born 1901-1924) is marked by the weathering of a conglomerate of historic global catastrophes—Spanish Influenza, the Great Depression and WWII among them.

Using 1924 as the last year of birth, the youngest members of the Greatest Generation hit their mid-90s in 2019. How many 95-year-olds do you know? Probably not many.

According to the U.S. Department of Veteran’s Affairs, three years ago there were only 620,000 left of the 16 million who served in WWII. Every day, nearly 372 of them die of old age. These treasure troves of experience and wisdom are quickly vanishing.

As children and teenagers, they endured the poverty and despair of the Great Depression. Young adults, many merely in their late teens and early 20s, took up arms to fight for their country after the bombing of Pearl Harbor. During the war, well over half the nation showed their support by purchasing $180 billion in bonds. This would be roughly $2.6 trillion today!

These people sacrificed. Without hesitation, they laid down their time, money and lives to ensure our way of life.

The thirst for power that led to the second world war and the greed and fiscal irresponsibility that brought the Great Depression were never God’s Way. Yet these difficult times introduced Americans to virtues rare in today’s hyper-divided, social-media-driven world.

How do we look today? As a nation we are financially rich beyond our wildest imagination and live in relative stability. Yet as rich and secure as we are, we are at the same time woefully poor in integrity and character.

If you doubt how different we are, imagine the events of the early 20th century happening today. Would people pull together if another severe economic depression were to hit? If we were struck by a foreign invader, would political parties and citizens alike band together or be too busy blaming one another? How many are too buried in debt to purchase war bonds if the need arose? Or worse, how many would simply not care?

I fear to consider the obvious answers to these and similar questions. Ultimately, it will take God’s Kingdom to come and help dig America, and the entire world, out of the mess we have gotten ourselves into.

We must fight historical amnesia. Human beings must do all they can to remember their past—both good and bad—ancient and recent.

Otherwise we are on the fast-track to repeat it.