This website requires the use of Javascript to function correctly. Performance and usage will suffer if it remains disabled.
How to Enable Javascript
After Cyclone Idai

United Nations Secretary-General Antonio Guterres called Cyclone Idai, which hit Mozambique, Zimbabwe and Malawi in March, “one of the worst weather-related catastrophes in the history of Africa.” Now the threat of water-borne diseases means the crisis is far from over. 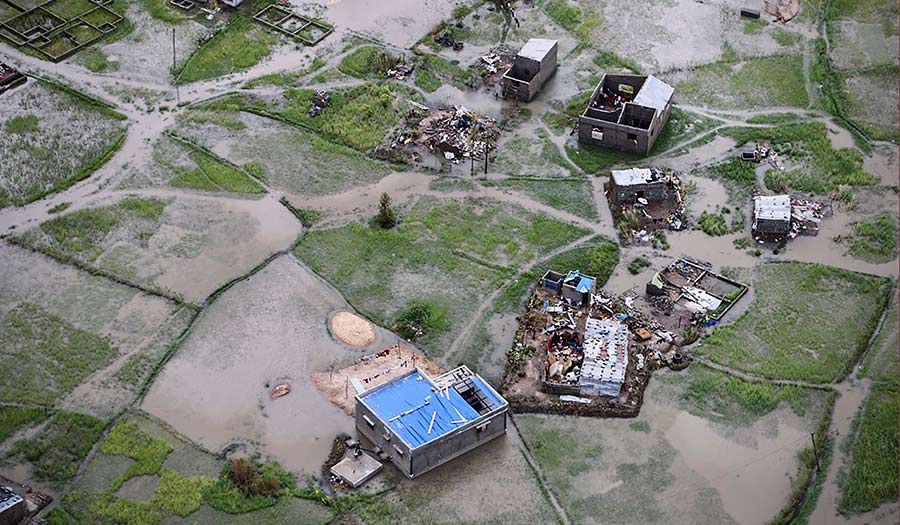 Adrien Barbier/AFP/Getty Images
An aerial view of the flooding on the outskirts of Beira, Mozambique (March 20, 2019).

Cyclone Idai was devastating for the more than 1.5 million people in three southern African countries, according to the UN and government officials.

“A family saw their brick house swept away from them. When they went to another house for safety, the roof collapsed,” Machiel Pouw, Save the Children’s response team leader in Mozambique, said in a statement. “Another family fled for safety in a tree. There are tens of thousands of heartbreaking stories like this, lives shattered over the past days.”

The vicious cyclone killed an estimated 1,000, left hundreds more missing, and stranded tens of thousands who are cut off from roads and telephones in mainly poor, rural areas. The death toll could tick higher as floodwaters drain away and reveal more bodies, some emergency responders have said. The actual number of dead may never be known.

Hardest hit was Mozambique’s central port city of Beira where the airport was closed, electricity knocked out, and many homes destroyed. The storm hit Beira then moved westward into Zimbabwe and Malawi, affecting thousands more, particularly in eastern areas bordering Mozambique.

Homes, schools, businesses, hospitals and police stations were destroyed by the cyclone. Roads and bridges were swept away, slowing rescue efforts by the military, government agencies and non-governmental organizations.

The storm left people living in tent camps, schools, churches, roads and other impromptu places on higher ground. Many were left with little but their clothes, and were forced to squat over cooking fires and pick their way around stretches of increasingly dirty water or simply walking through it.

In its wake, the storm has left a new problem that could threaten many more lives—disease.

The World Health Organization said it is expecting a “spike” in diseases which tend to spread due to standing water. Residents of the camps also expressed growing concern.

“Surely when people are in a crowded place they are all vulnerable, they face difficulties such as urination and defecation,” Jose Pedro told The Associated Press in Beira. “So the spreading of diseases such as cholera is easy.”

There were similar concerns in southern Malawi. In the Bangula camp in Nsanje district, about 5,000 people had just a few toilets.

The toilets “are very shallow and some are already full because the area is still waterlogged,” Joseph Moyo told the Oxfam aid group.

Early cases of cholera were validated in Munhava, one of the poorest neighborhoods in the hard-hit port city of Beira, the national director of medical assistance, Ussene Isse, told reporters. The city of some 500,000 struggled to provide clean water and sanitation after Cyclone Idai slammed into the region.

“You know, cholera is an epidemic situation. When you have one case, you expect to have more cases in the community,” the director said.

The number of cholera cases quickly surged past 1,000 in the days following the storm. The sharp increase raised stakes in an already desperate fight to help hundreds of thousands of people sheltering in squalid conditions.

Cholera is a major concern for all cyclone survivors living in crowded camps, schools, churches and any land exposed by draining flood waters. The disease is spread by contaminated food and water, causes acute diarrhea and can kill within hours if not treated with oral rehydration solution or intravenous fluids in severe cases.

The World Health Organization called the spread of the bacteria a “second disaster” if the waterborne disease expands in the devastated region. The WHO initially sent 900,000 oral cholera vaccines to cope with the potential outbreak.

During the height of the crisis, some people in the city resorted to drinking stagnant water by the side of the road, increasing the chances of diarrhea, the medical charity Doctors Without Borders said. Other people were drinking from contaminated wells.

“The scale of extreme damage will likely lead to a dramatic increase of waterborne diseases, skin infections, respiratory tract infections and malaria in the coming days and weeks,” said Gert Verdonck, the group’s emergency coordinator in Beira.

Relief operations made great efforts to deliver aid to the city that remained largely reachable only by air and sea. More challenging was reaching rural communities, some of them without contact with the outside world.

In Chimanimani, Philemon Dada began rebuilding his life in what was once a picturesque town. With a machete and a hoe, he salvaged poles from the mud to construct a hut to shelter his family, a first step in what he sees as a long and backbreaking journey to rebuild a life shattered by Cyclone Idai.

He is one of many villagers trying to pick up the pieces in Chimanimani after losing homes, livestock and, in many instances, family members. Some have been taken in by neighbors and others are sheltering with church pastors.

“I can say I am a bit lucky. My wife and son are still here with me but for everything else, I have to start from scratch,” he said.

Mr. Dada had a few food items handed out by the Zimbabwe military, but he knew that would not last long and he was eager to start growing crops again. Like many people here, he survives on agriculture.

“My bean crop was ready for harvesting before the cyclone, the maize was close. I am back to zero,” he said.

He is particularly pained by his two prized bulls that did the heavy work of drawing the plow for his field. They died in the floods.

“It may take a year, maybe even more years just to get back on my feet,” he said.