This website requires the use of Javascript to function correctly. Performance and usage will suffer if it remains disabled.
How to Enable Javascript
A Fix for the Work-Life Imbalance

A Fix for the Work-Life Imbalance

An age-old principle can keep us from blurring the line between our professional and personal lives. 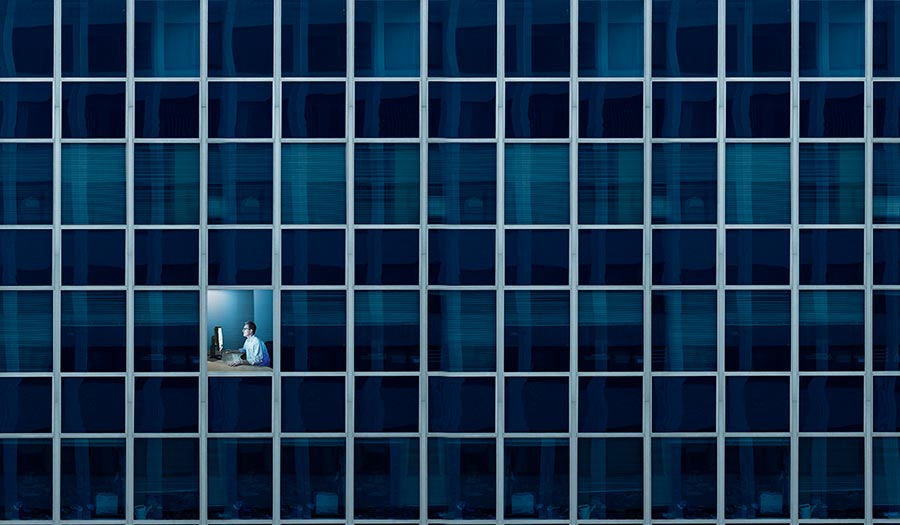 It started with advancing technology. “The American workweek has soared from less than 40 hours to nearly 50,” philanthropist and Microsoft general manager Melinda French Gates said in a column on LinkedIn. “Technology has made it harder to pull away from our jobs, and easier to wonder whether a night off or a long weekend is damaging our careers.”

The article was mainly about how women fare in today’s workplace. But her observations on how people often work excessively, technology facilitating it, is a case in point.

And that was pre-COVID.

Many of us have experienced how work-at-home mandates and other restrictions implemented in early 2020 made it harder to ditch our laptops and email inboxes.

One American employee recounted his transformation during that time in Deseret News: “Without the commute, I could now start working as soon as I woke up, which I did. I often didn’t even take the time to change out of my pajamas. I went upstairs to my home office and worked. And worked. And sometimes forgot to break for lunch. After dinner, if I got bored or just remembered something that needed to get done, I’d sneak back for another round.”

“Remote work once seemed like a temporary, emergency response to the pandemic. But now that we’ve realized how much we can get done without actually having to pay for office space, and how much cheaper that is, it’s likely to become the norm for millions of Americans.”

According to Bloomberg, Americans working from home were logging at least three extra hours to their typical workday. This led to burnout for many, which contributed in part to the millions of American workers quitting their jobs during the aptly named Great Resignation.

Work is a good thing. It makes us feel useful, productive, challenged, accomplished. Work allows us to contribute something to society, paves the way for wealth, pays the bills, and puts food on the table.

Yet, as with everything in life, labor has its limits. Somewhere near the edge of those bounds, with our current ability to stay connected 24/7, a hidden trap lurks.

“Most of us know that continually logging excessive hours can be bad for our backs and brains, as well as strain relationships (especially when we type on our iPhones during family dinners),” journalist Laura Petrecca wrote in USA Today. “But it’s just one more email to send. Oh wait, it’s two, maybe three…suddenly it’s a half-hour later.”

The constant connection means we must confront a newish irony: achieving work-life balance now takes work. We might as well more accurately refer to it as the work-life imbalance.

Too Much of a Good Thing

In extreme cases, overworking can kill you. A Japanese woman made international news after it was announced she died of congestive heart failure at age 31 after logging over one hundred hours of work per week.

Several news outlets featured her story. Her death nevertheless is far from a rare, isolated event. Karoshi (Japanese for “overwork death”) is so prevalent there that some employers are implementing creative and drastic measures. One company reportedly plays the theme from the movie “Rocky” at the end of the work day to remind employees it is time to go home.

The Japanese are far from the only ones with a proclivity to break work-life balance norms. While other countries may not be at the level of karoshi, overworking is a 21st-century reality for countless professionals the world over.

Ben Waber, CEO and president of the people analytics company Humanyze, believes overwork is not endemic to Asia. He said in Quartz: “In the US, most discussion of karoshi has assumed that overwork culture is specific to Japan. What many don’t realize is that the problem of overwork is possibly worse in the United States.”

Mr. Waber studied two years’ worth of communication data from some of his clients in both countries.

“At first glance,” he wrote, “it appears that Japanese workers extend their workdays longer, working an average of 47 minutes after 6 pm versus an average of 30 minutes for American workers…When we look into the actual timing of this work, however, it appears that workers at Japanese companies aren’t working as much through the late hours. In Japan, about 58% of all e-mails after 6 pm are sent between 6 pm and 7 pm. By contrast, in US companies only 25% of these emails are sent between 6 pm and 7 pm, implying that, in the US, workers tend to splice work into their home lives to a greater degree.”

What about other countries? According to the Organization for Economic Co-operation and Development’s Better Life Index website, out of the 20 countries it monitors: “Turkey is by far the country with the highest proportion of people working very long hours, with 39%, followed by Mexico with nearly 28% and Israel with over a sixth of employees.”

All this overworking is counterproductive and detrimental to our health. It puts an extra toll on our hearts due to stress. As a Harvard Business School/Stanford University study put it, stress at work can be just as damaging to health as secondhand smoke.

To summarize: Chronic overwork equals karoshi on the installment plan.

A slew of unhealthy habits can be traced back to overworking. “All too often the things we do to cope are not healthy,” Wendell Potter wrote in a post featured by Thrive Global, a start-up that strives “to end the stress and burnout epidemic.”

Mr. Potter continued describing that his was “drinking too much. And like a lot of other people, I bought things I didn’t need, racking up credit card debt and finding out, repeatedly, that instant gratification is just that, gratification that barely lasts an instant. Many of us buy bigger and fancier houses than we need, and take on more mortgage debt than we know we should, further assigning ourselves to a hamster wheel that all too soon seems impossible to get off. We become enslaved to our employer and our creditors.”

Beyond these self-destructive effects, overworking can also take a damaging toll on relationships. Spouses and families must compete with jobs.

Chronic over-workers are absent from family gatherings. They miss their children’s concerts, sports games, and parent-student nights. They claim to not have time for a date night. Their conversations are mainly about their jobs, which makes them seem self-absorbed and plain boring. They bristle anytime someone even hints they are working too much.

You likely experience some or all of these symptoms. Or you have a loved one who does.

If you are staring in the face of the work-life imbalance, the quest to reach equilibrium can seem daunting, impossible. Yet realize that you must be alive to work! So, what can you do to restore order?

Recall that work is good. Overwork is not. The plain antidote to overwork is rest. Rest is the part of life that has the power to counteract the effects of overwork.

The positive effect of rest on work productivity is not a new concept. Some employers support this principle by promoting “stop days”—regular work days without meetings or interruptions—or “tech sabbaths,” which are days without interaction with technology.

“Filmmaker Tiffany Shlain, perhaps best known her film Connected and for founding the Webby Awards, goes without electronics from sundown Friday to sundown Saturday every week—a kind of Tech Shabbat,” a 2013 Fast Company story stated. “Her whole family takes the time with her. She says it turns every weekend into a mini-vacation and prevents the technology fatigue that’s so ever-present among those of us who spend all day in front of screens.”

The principle behind “sabbaticals” is alike. Sabbaticals is a manmade idea derived from the biblical command to take a year off from farming every seven years, to allow for a “land sabbath”—a full year of rest for the land.

In all these initiatives, the idea is to rest, or disconnect, from whatever environment is sapping your energy, focus and time to strike a balance. It is a way to allow time to compensate for extreme work.

It is unsurprising that some of these practices allude to the term “Sabbath.” What may surprise you is that, within the original “day of rest” command, a fix for the work-life imbalance was prescribed thousands of years ago.

The first book of the Bible states: “On the seventh day God ended His work which He had made” (Gen. 2:2).

This practice became the fourth of the Ten Commandments: “Six days shalt you labour, and do all your work: but the seventh day is the sabbath of the Lord your God: in it thou shall not do any work…for in six days the Lord made heaven and earth, the sea, and all that in them is, and rested the seventh day: wherefore the Lord blessed the sabbath day, and hallowed it.”

The commandments were given by God for the benefit of mankind. When Jesus Christ referred to the Sabbath law, He said “The sabbath was made for man…” (Mark 2:27). It is the foundation for striking the work-life balance.

Realize that the language makes the Sabbath non-negotiable rest time. Additionally, this command not only contains instruction to rest on the seventh-day Sabbath, but also to work outside of it. It shows the appropriate work-life balance in action and essentially defines overwork as anything done outside a six-day framework.

Setting 24 hours aside for the Sabbath, out of 168 hours in a week, goes a long way in helping solve the work-life imbalance. It is much more comprehensive than a “tech sabbath” or “sabbatical.” It is a day to be recharged wholly—physically and spiritually.

However, this weekly repose alone is not a cure-all for the work-life imbalance. We must also apply the principle of rest on a daily basis.

In addition to telling mankind of the weekly Sabbath’s benefit, Christ recognized the importance of balancing daily work with personal time. In John 11:9-10, He said: “Are there not twelve hours in the day? If any man walk in the day, he stumbles not…But if a man walk in the night, he stumbles.”

This statement had a spiritual meaning, but the principle can apply to our physical work. It is most efficient to do our tasks when during the day and to refrain from slaving away in the night when it is inefficient and unhealthy. In one instance, Jesus gave His disciples a rest after so much labor “they had no leisure so much as to eat” (Mark 6:31).

When done right, maintaining daily boundaries and keeping the weekly Sabbath can be utterly transformative. This millennia-old principle is still helping many people today keep themselves from the dangers of overworking.

For more on what the Bible outlines for this weekly day of rest, read Saturday or Sunday – Which Is the Sabbath?

Saturday or Sunday – Which Is the Sabbath?